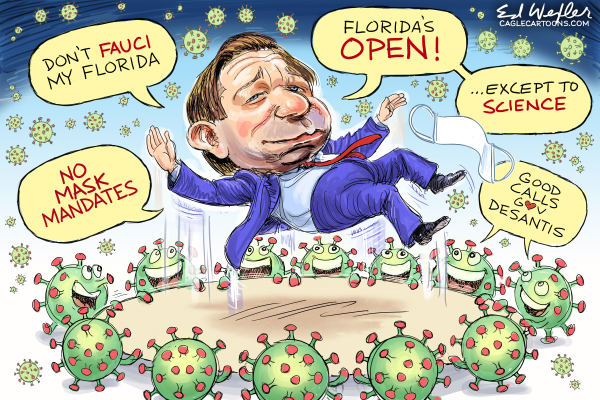 Even as the delta variant of the COVID-19 virus rips through the country, sending infections and hospitalizations soaring to levels not experienced in months, many Congressional Republicans cling stubbornly to the notion it’s no more serious than a hangnail and preventive or protective steps are unnecessary.

From the onset of the most serious public health crisis in a century, efforts to combat and ultimately overcome it have been afflicted by political polarization and ideological divisions that have stymied much of what was expected from the current Congressional session.

Republicans defied her order, ambling maskless throughout the Capitol and the legislative chamber, accusing the Speaker of seeking to amass greater control by using the surge in infections as a political weapon rather than a public health measure.

The environment deteriorated to a personal level when Pelosi called Minority Leader Kevin McCarthy “a moron” for his anti-mask remarks while a Congresswoman reportedly threw a mask back at a House staffer who offered it to her.

McCarthy took up the power grab cry, although neither he nor his colleagues offered any rationale for or examples of what additional powers Pelosi would accrue by ordering safety precautions in Congress.

The bitterness playing out daily in Congress has contributed to so-called vaccine hesitancy, as Americans seized on the arguments at the highest level of government as justification for refusing the vaccine.

They are swayed by individuals like Sen. Rand Paul of Kentucky, who has led a crusade against Anthony Fauci, director of the U. S. National Institute of Allergy and Infectious Diseases. He was joined by Congressman Madison Cawthorn of North Carolina who called for Fauci’s prosecution, characterizing him as a pawn of Communist China, while attacking a government program to go door to door to urge the unvaccinated to receive protection as a sinister plot to confiscate guns and bibles.

The seeds of mistrust they’ve sown have reinforced misgivings people hold about the vaccine.

The speed with which the variant has spread outpaced the ability of several states to deal with it and forced reversal of the earlier easing of restrictions.

At the same time, numerous governors and legislatures have prohibited mask wearing mandates and disregarded recommendations from the Centers for Disease Control and Prevention to restore measures such as social distancing and limits on indoor gatherings.

The Biden administration as well has stumbled badly, guilty of confusing and conflicting messaging and offering muddled explanations of its position.

The president has continued to emphasize vaccination rates as the most effective response, but has not taken the most controversial step of mandating immunizations, fearing a popular rebellion against big government encroachment on privacy rights.

He has, though, ordered all federal employees to either receive the vaccine or submit to testing procedures every few days. His directive was quickly interpreted as a clear example for the private sector to follow, thus avoiding the uproar a mandate would produce but gaining progress in the broader effort toward increased vaccinations.

Republican critics have framed the debate as a matter of privacy, insisting that the decision to seek a vaccination or reject it is highly personal and government should not rely on coercion.

If persuasion fails, individual choice must be respected.

The spectacle of the nation’s elected leaders - ideally men and women of intellect and temperament - falling into a public brawl while a pathogen that has sickened 36 million Americans and killed nearly 630,000 rages on is an embarrassment and diminishes them in the eyes of the nation and the world.

In the meantime, Americans will continue to fall ill and enter hospitals and some will not survive. The nation deserves better.