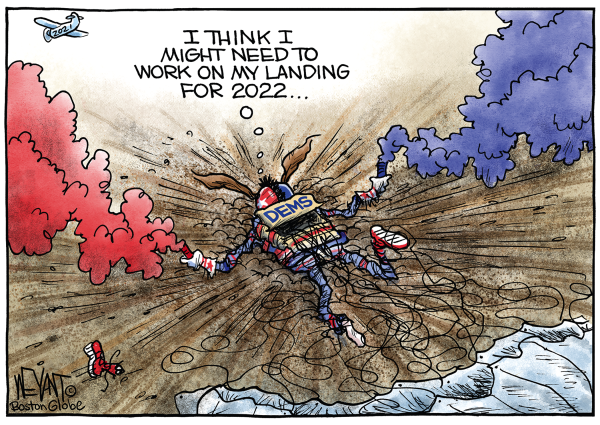 While Republicans are positively giddy over the party’s sweep of Virginia and the near miss in reliably blue New Jersey, Democrats have succumbed to public bickering and finger pointing over who and what was to blame.

Whatever détente was possible between the party’s progressives and centrists vanished on the morning after the election, as leaders of both factions gazed at the smoking rubble that once was their party.

Overjoyed Republicans immediately touted the election of Glenn Youngkin as Virginia’s governor as an unmistakable harbinger of an inevitable blowout in next year’s Congressional midterms. House Minority Leader Kevin McCarthy, caught up in the euphoria of the moment, predicted a Republican gain of as many as 60 seats in the House in 2022.

Republican optimism has been growing steadily and, even before the favorable outcome in Virginia and the close call in New Jersey, regaining control of the Congress next year shifted from possibly to assured.

Moderate Democrats attributed the poor showing to voter perception that the party had careened too far to the left, that it had become synonymous with radical ideas that a majority of Americans found unacceptable if not frightening.

Progressives responded by insisting that the party had become too timid, that failing to embrace major new spending and tax increases to finance vastly expanded social programs doomed its chances.

The prevailing mood of the nation suggests strongly that the progressives are on the wrong side of the debate, and that the party failed to recognize or respond to the trend toward centrist policies with broader and deeper support in the country.

The leftists had created a context in which the Democrats were the party of de-fund the police, open the borders, and cancel culture, as well as appearing to sympathize with violent street protesters and replace capitalism with socialism.

Fairly or not, the perception stuck, helped by the ceaseless social media drumbeat by progressive leaders’ relentless assault on those who counseled middle of the road moderation.

New York congresswoman Alexandra Ocasio Cortez, a leader of the left, fired back at Carville, declaring his day had come and gone and his brand of politics was no longer relevant.

Carville, though, identified the discontent abroad in the nation, a sense that government and its leaders are indifferent to concerns and frustrations of a populace who feel ignored by a dismissive and condescending ruling class whose principal concern is to remain in power.

The woke movement Carville referred to had inflicted serious damage on the party by espousing causes which were discussed in faculty lounges of academia and had no place in the lives of everyday Americans.

The Biden administration’s stumbles and the free fall in public approval has only added to the sense of a government in disarray, one which, when confronted by a crisis, denies the existence of one, minimizes it as inconsequential or offers assurances that it is under control and no cause for concern.

The agonizing, protracted debate over the bipartisan infrastructure bill, pitting moderates against progressives, embarrassed the president and the congressional leadership and cast doubts on their ability to deliver anything of consequence.

Even Democrats fretted aloud that McAuliffe would have benefited enormously - perhaps, even won - had the infrastructure bill been approved prior to the election and given him a significant talking point about successful governing.

The Democratic defeats was a tale of voter anger and disappointment. The party presented a large and inviting target to focus on and send a message: There’s more to the country than New York, California and Bernie Sanders.