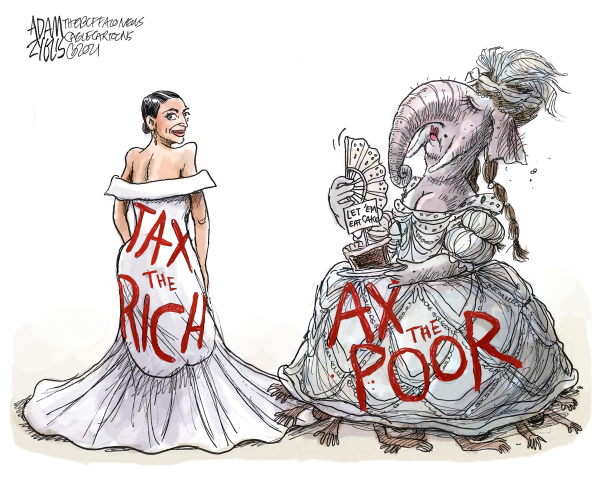 I think I finally understand what white privilege looks like.

I caught some photos of the Met Gala last week, complete with Whoopi Goldberg dressed in something that can only be described as a giant crocheted toilet roll holder and AOC flaunting her chassis in a form-fitting dress with the words “Tax the Rich” scrawled in blood red on her butt.

The Met Gala is designed to raise money for the eponymous New York City museum, a place where I’ve spent many joyous hours as both a child and adult. I fully support the arts, and the need to protect and promote them in an era where everything has become polarized, pasteurized or petrified. Without them, we are Neanderthals before the cave drawings.

But there is a cognitive disconnect in charging people $35,000.00 per ticket, at a time when people are literally struggling to put food on their tables. It is obscene that the equivalent of a yearly salary would be spent on a dinner, a gift bag stuffed with trinkets and a photo op.

The great irony in all of this is that the person writing this column is a conservative who opposes eviction bans, prolonged unemployment subsidies and COVID lockdowns. She’s someone who believes that those who refuse to return to work until they can be assured that there is less than once scintilla of a percent of possibility that they’ll be infected with the virus never intended to return to work in the first place.

I am not one of the woke, who thinks the free-market system is dangerous because it crushes brown and Black people under its massive weight. None of those things make any sense to me.

And yet you would not see me dead in one of those monstrous confections created to display the whimsical yet deeply caring zeitgeist of the wearer. When you go to a costume party, you are not supposed to take yourself seriously. And yet, that is exactly what AOC did, as she paraded herself through the halls, mask-less from all accounts, like a clueless Disney Princess with a Jackson Pollack painting splashed on her tochus.

That bubble is as white and sanitized as the space shuttle at lift-off. There are no germs that pierce its inner realms, infecting the happy residents with a dose of reality. The people who live within that bubble, and it is quite large and encompasses actors, journalists, politicians and certain religious folk, are incapable of understanding the rest of us out here in the greater world. They think they know who we are, what we need, how we are violating their standards and what should be done with us if we fail to acknowledge their wisdom. They believe that they can lecture us on climate change and reproductive rights, on clean eating and religious plurality, on which lives matter and which are useless. Their speeches sound good, when spoken back to them by others in that echo chamber.

But the rest of us see who they are and what they stand for, and we laugh. They might not hear us, in that bubble, but the sounds are becoming louder and more constant with each passing day. Inhabitants of the bubble have the whitest of privileges, the right to ignore reality. They have the luxury to care for the proletariat, as long as they themselves are fed, housed, groomed and cosseted. Unlike FDR whose birthright privilege did not prevent him from empathizing with the desperate and the dispossessed, these folks are all appearance. They might look compassionate, but each one has a portrait in their attic crumbling from moral decay.

Every time I hear someone attack me or my conservative friends for our “white privilege,” I chuckle. I’ve heard Larry Elder, Clarence Thomas, Condi Rice, Alveeda King and Candace Owens accused of exercising “white privilege.” I’ve seen Marco Rubio, Ted Cruz, Alberto Gonzalez, Maria Salazar and Susanna Martinez tagged with “white privilege.” You can, apparently, be brown and Black and yet have a certain color of privilege, according to the left.

But the true color of privilege is the color that defines your world view, one that allows you to preach and prattle on about how we need to take care of the poor, all the while draping yourself in diamonds and disdain and traipsing around for the cameras.

Limousine liberals have always been with us. They just used to dress a lot better.