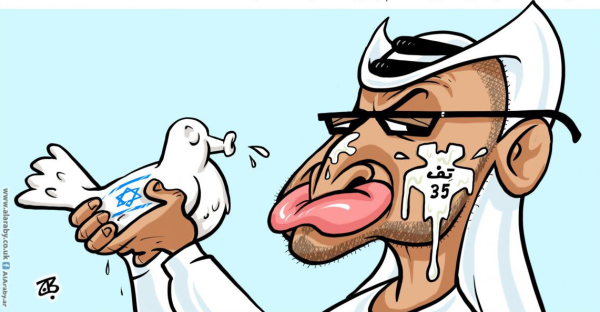 My friend, Emad Hajjaj, was arrested on Wednesday in his home country of Jordan. His crime? Drawing a political cartoon.

Hajjaj has been charged with the “cybercrime” of “insulting an Arab country” and faces significant time in prison (reports differ between five and 10 years of hard labor) for drawing an “offensive” cartoon criticizing Crown Prince Mohammed bin Zayed of the United Arab Emirates. Hajjaj, who draws for the Al-Araby newspaper in London, was arrested five hours after posting the cartoon to the newspaper’s web site.

I run a newspaper syndicate (CagleCartoons.com) that has distributed Emad’s work to over half of America’s daily, paid-circulation newspapers for the past fifteen years. Emad is a dear friend of mine and of cartoonists around the globe. We’ve had a great time traveling together to exotic, cartooning destinations. Since Emad is everyone’s friend in our tight-knit, global community of editorial cartoonists, his arrest comes as a quite a shock in our small world.

Jordan is a close ally of the United States and has a long history of press freedom – until this year. According to the International Press Institute, “As part of its efforts to limit the spread of Covid-19, the government declared a state of emergency in March 2020, introducing a 1992 Defense Law that gave authorities sweeping powers to impose curfews, close businesses – and gag the press. At least 13 journalists have been arrested and summoned for questioning by security forces since the pandemic began.”

Emad’s cartoon depicts Crown Prince Mohammed bin Zayed, commonly called “MBZ,” holding an Israeli dove that has spit on his face, with the spittle in the shape of a U.S. F-35 fighter jet. The U.S. recently brokered a treaty between Israel and the UAE, and in a possibly related deal the U.S. agreed to sell advanced F-35 jets to the UAE. Israel is opposing the sale, arguing that Israel’s defense advantage in the region would be compromised if UAE gets the jets. Hajjaj’s drawing shows that Israel has embarrassed MBZ by blocking the sale after the UAE agreed to the peace deal. Emad drew this spat as spit.

According to Al-Araby, Hajjaj was referred to the “notorious State Security Court” by the attorney general in Amman, Jordan’s capital. The SSC has jurisdiction over crimes involving drugs, explosives, weapons and high treason, but Al-Araby reports the court has been increasingly used to put peaceful protesters and government critics on trial.

“The country’s infamous 2015 cybercrimes law was widely criticized by rights groups, who say it is a pretext to crack down on any individual who criticizes the government,” the newspaper reported. “Amendments added to the law in 2018 also made the distribution of articles considered slanderous punishable with a prison sentence.”

Hajjaj is being held in jail pending the conclusion of an investigation. After that, he may face charges and many years of jail time. He has been transferred to the notorious “Salt Prison” outside of Amman.

Daryl Cagle is an editorial cartoonist and columnist; see his work at DarylCagle.com.Daryl runs the CagleCartoons.com newspaper syndicate distributing editorial cartoons to more than half of America’s daily, paid-circulation newspapers, including the paper you are reading now.Comments to Daryl may be sent to [email protected]

Daryl Cagle is the publisher of Cagle.com and owner of Cagle Cartoons, Inc, which distributes editorial cartoons and columns to over 850 newspapers. See Daryl's blog at: www.cagle.com/daryl, see his site at: Cagle.com get permission to reprint his cartoons at: PoliticalCartoons.com.
View Full Archive

by Tom Purcell
When life serves you lemons, you make lemonade. That's the thinking of no small number of bold Americans who are starting new businesses amid COVID-19's disruption. According to Philadelphia PBS station WHYY, applications for new businesses are ...
Biden Right To Sidestep Calls for Court Packing Scheme

by Carl Golden
It took a few days, but cooler and infinitely wiser heads among Democratic Party leaders - including presidential candidate Joe Biden - distanced themselves from demands from vocal leftists that the Supreme Court should be expanded and packed wi ...
Shedding Light on AARP

by Peter Roff
"Saturday Night Live" is known for many things, especially the commercial spoofs that for decades have lampooned merchandise and marketing trends. One of the most iconic featured Chevy Chase as a pitchman hawking a product that was both "a desse ...