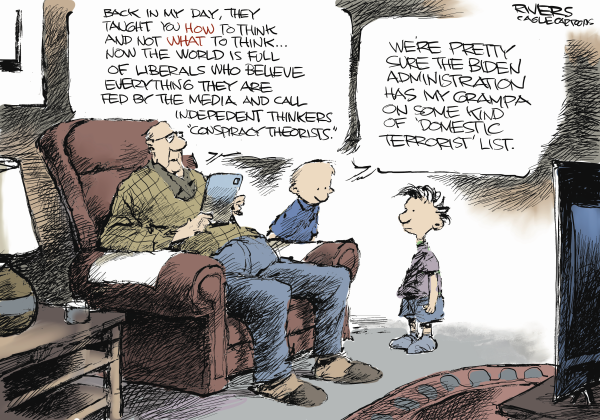 Many schools across the country teach The 1619 Project, indoctrinate students with the message that America systematically oppresses Black Americans, and push students to adhere to the Left’s political orthodoxy.

Reading and watching news reports about parents, students, and other concerned citizens dissenting against – and suffering substantial consequences for dissenting against – these poisonous practices brought to mind my single grade school act of dissent about 45 years ago against much less offensive indoctrination and how much more accepting of dissent America and its schools then were.

It was the winter of 1978. I was in eighth grade. My entire junior high school was attending a mandatory assembly in the school gym about the civil rights movement.

For years before I reached eighth grade, I had been very interested in the struggle of Black Americans for freedom and equal rights. I had read books for teens about the history of slavery in America, the Civil War, and the life of Frederick Douglass. I had watched a PBS documentary about the Scottsboro Boys. I had exchanged letters with famed Black historian John Hope Franklin, who provided an answer to my question about whether George Washington, Thomas Jefferson, and our other slave-owner presidents had brought their slaves to the White House.

I believed then (and have always believed) in the message of the civil rights movement as eloquently stated by Martin Luther King, Jr.: that each of us should be judged by the content of our character rather than the color of our skin – or indeed our religion or any other physical or demographic characteristic.

King was one of my heroes. He still is. For the last quarter century, I have had on my wall a poster of the great man giving his 1963 “I Have a Dream” speech, with a key excerpt highlighted at the top.

With that background, I enjoyed the school program as it proceeded for about an hour. The speakers discussed the fight for freedom from slavery and the struggle for equal rights and against terror by the Klan and the oppression of the Jim Crow South.

And then the completely unexpected happened. At the end the program, the speaker instructed all to stand for the singing of “Lift Every Voice and Sing.” I had never heard of the song. I was about to stand when the speaker added that the song is “the Black National Anthem.”

That statement caused something in me to snap. My only thought was that Americans – all Americans – have one and only one national anthem. I stayed seated while everyone else stood.

A teacher nearby told me to stand. I had great respect for teachers and their authority, but my gut told me that it would be wrong to stand. I didn’t. I knew that I might be punished for not standing but I thought very little about that. I instead continued to be focused on how contrary to America’s ideals it is to sanction the existence of a separate national anthem for Black Americans.

After the assembly, unlike what I suspect would happen in 2022 in many schools, there were no consequences. I don’t even recall discussing any of this back then with my parents or anyone else.

Also unlike 2022, American culture and mass media in the 1960s and 1970s supported standing alone for what is right against what is popular and politically correct but wrong. This is reflected in the differing positions of the American Civil Liberties Union. In 1978, the ACLU defended the right of Nazis to march in Skokie, Illinois, a Chicago suburb in which many survivors of the Holocaust lived. By 2018, the ACLU had adopted “new guidelines” that “suggest that lawyers considering free speech representation of groups whose values ‘are contrary to our values’ should weigh how such a case could give offense to marginalized groups.”

It is a sad fact that we now live in an America in which schools suppress dissent and foment racial divisiveness that permeates so much of our culture and especially our schools.

David M. Simon is a senior fellow at the Committee to Unleash Prosperity and a lawyer in Chicago. He can be reached through his website, http://www.dmswritings.com.

David M. Simon is a senior fellow at the Washington-based Committee to Unleash Prosperity and a lawyer in Chicago. Simon is a graduate of Johns Hopkins University and an honors graduate of the University of Wisconsin Law School. Simon can be reached at his website, DMSwritings.com
View Full Archive