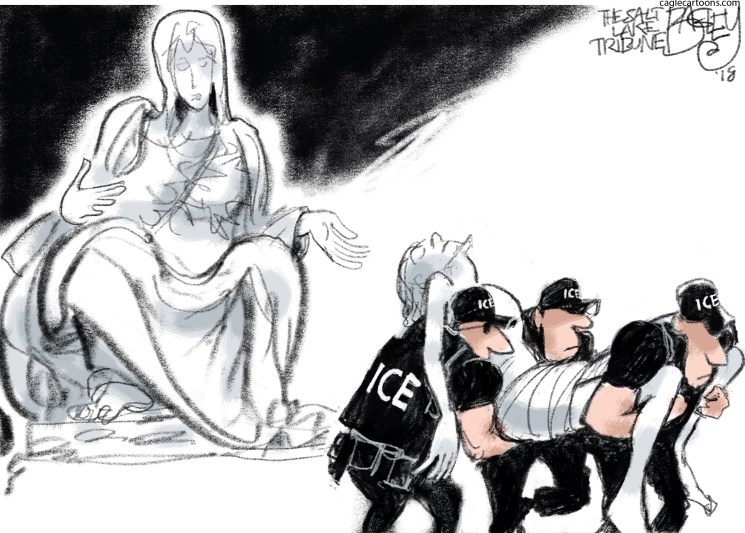 It may seem crass to discuss the potential political impact of Trump’s family separation policy – especially when we can hear the kids wailing for their parents – but we do need to ask:

Maybe there’s reason to hope. Even Anthony “The Mooch” Scaramucci, the short-lived Trump flack, says that the TV “optics” of little kids crying for their moms are bad for a president who understands the power of imagery. He tells CNN, “It’s not good for the Congress if we want to win the midterms.”

Chris Warshaw, a political scientist at George Washington University, having crunched the poll numbers from Quinnipiac and Ipsos, says that public support for Trump’s caging of kids is the lowest for any policy proposal in the last 30 years. And one of the most highly motivated cohorts in the projected midterm electorate – women – are especially contemptuous.

According to Quinnipiac, 66 percent of voters (including 68 percent of independents) gave a thumbs down to Trump administration’s no-tolerance policy. Women in particular were more fervent about it. A whopping 70 percent said they were opposed; only 22 percent supported. Those were the stats for all women, including minorities. But the numbers were virtually the same for white women (65 percent opposed, 25 percent support) -and that’s significant, because a majority of white women voted for Trump in 2016.

The obvious risk for Trump and the GOP (even as Trump continued to fake-blame “Democrats” for the policy he owns) is that women in particular won’t vote for a heartless party that treats children like animals. As one Republican strategist told NBC News, “The media will broadcast these images of brutality and chaos, and the public will associate them with the Republicans that run the House and Senate.” A second GOP strategist said, “The images are devastating.”

The pollsters at Ipsos basically asked people whether they agreed with Jeff Sessions’ argument that the separation policy is designed to be a deterrent. But again, the public signaled strong opposition; 56 percent said the policy is inappropriate, only 27 percent signaled support. And that sentiment was stronger among women; 59 percent oppose it, only 23 percent support it.

Granted, it’s only June. One dares not even imagine what else Trump will do between now and November, with only a smattering of Republicans bleating empty words. But Trump being Trump, he shows no signs of backing away from his border brutality. According to projections by the Department of Health and Human Services, the number of undocumented immigrant kids in federal custody could top 20,000 by August.

That should keep the issue alive for the electorate. Stephen Miller, the white nationalist adviser who pushed for Trump’s policy, apparently thinks it’s a boffo way to gin up white-grievance midterm turnout, but his strategy may well backfire. The Ipsos poll reports that only 46 percent of self-identified Republicans support family separation, and that’s a very low figure for a party that typically marches in lockstep. Meanwhile, the slice of the electorate that rightly detests Trump – the same slice that has triggered Democratic wins in scores of state and federal special elections – now has another issue to stoke its ire. And because it’s about children, it’s arguably the most visceral issue of all.

Trump, of course, has the power to pull the plug and prevent his opponents from using it against him. As he said at the 2016 Republican convention, referring to America’s ills, “I alone can fix it.”

So fix it already. Do it for the kids.