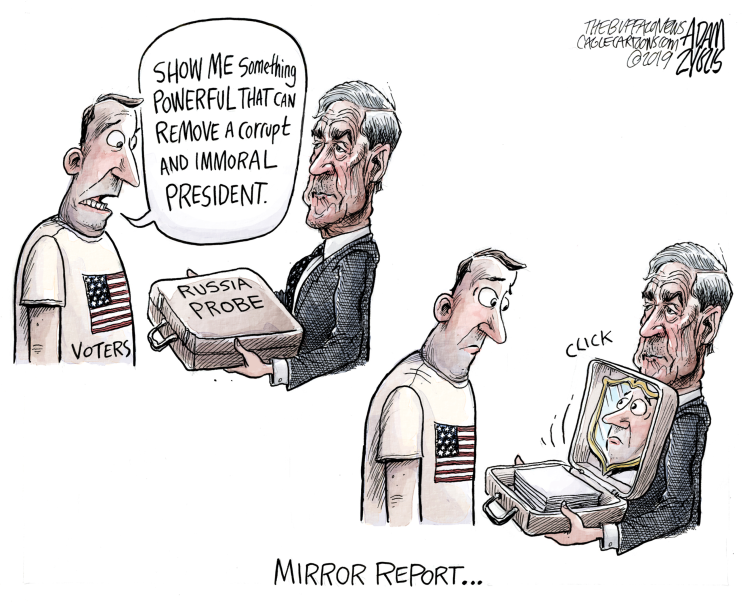 Just suppose, for the sake of argument, that a Democratic president had acted as a doormat for Russia, indulging and amplifying an unprecedented soft invasion of America via its electoral process. Just suppose, after having benefited from the cyber-invasion conducted on his behalf, that same Democratic president had sided with Russia against his own intelligence agencies, and had systematically lied and obstructed a years-long federal investigation.

If that were ever to happen, what are the odds that an aggrieved and unified Republican party would be demanding the president’s impeachment and removal, hammering the public 24/7 with hearings and hashtags?

As if we need to ask.

See, here’s the asymmetric difference between Republicans and Democrats: One party (guess which one) instinctively revels in the exercise of power, busts boundaries without apology, and triples down on what it believes, even if it means defending a cult leader and trashing the rule of law. The other party (guess which one) instinctively quakes in its shoes, fearing that if it stands up for what it believes, the opposition and some of the voters will get very mad.

That’s what we’re seeing now. Robert Mueller has teed up the House Democrats to do their job – to act on a report that has exposed a breadth and depth of presidential perfidy that dwarfs Watergate – and yet they hesitate. The swing voters in 2020 swing states might not support an impeachment process, they say. The House process would be futile because the Republican Senate will never remove Trump, they say. So their instinct is to unilaterally disarm, to abet the normalization of authoritarian lawlessness.

This is no time for dereliction of duty. Instead of fretting about an anti-impeachment voter backlash in 2020, they should heed what Mueller wrote in his report about Trump’s multiple obstructions of justice: “The Constitution does not authorize the President to engage in such conduct, and those actions would transgress the President’s duty to ‘take care that the laws be faithfully executed.'” If House Democrats flex the power that voters granted them in 2018 – if they hold hearings and move toward impeachment if and when the evidence warrants – they can move the needle on public opinion. It’s called leadership. It’s about standing up for American values and the rule of law.

And if the Republican Senate refuses to convict and remove Trump, fine. Put the GOP on record. Make the GOP own their amorality. Make that an issue in 2020 – along with health care and other kitchen-table fundamentals. Democrats should be fully capable of walking and chewing gum at the same time.

Fortunately, there are glimmers of hope that House Democrats might be strengthening their spines. Last week, Elizabeth Warren called on the House to initiate impeachment proceedings against Trump, by far the strongest comments of any 2020 candidate.

The impeachment standards were firmly established in 1974, by the House Judiciary Committee’s legal counsel, six months before Richard Nixon quit. John Doar, a registered Republican, outlined a wide range of impeachable offenses, including many that resonate today: “… undermining the integrity of office, disregard of constitutional duties and oath of office, arrogation of power, abuse of the government process, adverse impact on the system of government… conduct seriously incompatible with either the constitutional form and principles of our government, or the proper performance of constitutional duties.”

And we can add serial lying to that list: “Lying to the American people is a betrayal of trust. The pattern of deception and dishonesty that acts as a bodyguard to this president strikes at the very core of his ability to lead. Either the president chooses contempt or complete disregard – or his conscience is so diminished as to leave him unable to discern the truth from his lies.” So said Republican John Thune, on the House floor in 1998, citing his reasons why Bill Clinton should be impeached.

Today, Thune is a high-ranking member of the Republican Senate – one of the craven Trump enablers who refuses to put country over party. It’s up to the Democrats to put country first and act in the national interest.