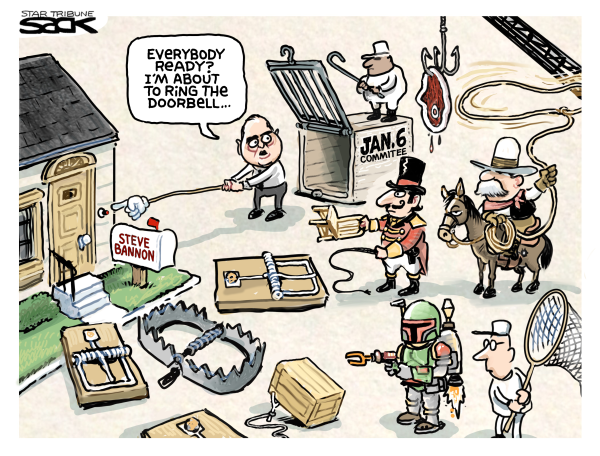 Don’t you feel a wee bit bad for Merrick Garland?

That lament may well be aimed at the U.S. attorney general, who has vowed to restore the rule of law by bringing justice back to the Justice Department. By now it’s crystal clear that the lowest people in the highest places, on the eve of Jan. 6, conspired to take democracy down. Indeed, the House last week voted (nine Republicans even concurred) to recommend that subpoena stonewaller Steve Bannon be prosecuted by the DOJ for criminal contempt. As Adam Schiff remarked, “Are some people truly above the law, beholden to nothing and no one, free to ignore the law and without consequence?”

I guess we’ll find out at some point. All Garland has said thus far is that his department “will apply the facts and the law and make a decision consistent with the principles of prosecution,” which could mean anything.

But, if I may muster a smidgen of sympathy, Garland is in a tough position. He’s a high-minded man of probity who’s been tasked to confront the lowest form of human life. As Slate legal analyst Dahlia Lithwick shrewdly observed the other day, “the big lie is already going halfway across the world while the institutionalists are still double-knotting their loafers.”

On the one hand, If Garland does nothing to hold the coup plotters accountable, it will irrevocably shred the DOJ’s credibility, erase the rule of law, sanction the use of violence, and give MAGAts the green light for the final conflagration in 2024. Schiff, in a recent podcast, worries about that: “I think there’s a real desire on the part of the attorney general not to look backward…I disagree with (that) most vehemently.”

For instance, federal law – 18 U.S.C. 371 – says it’s a crime to defraud the federal government. And it’s clear, thanks to a Supreme Court ruling in 1925, that obstructing a free election and the ritual counting of electors, falls well within that language. The court ruled that it’s a federal crime “to interfere with or obstruct one of (the) lawful governmental functions by deceit, craft or trickery, or at least by means that are dishonest.”

There’s also abundant language in 18 U.S.C. 2384 to indict Trump and his plotters for seditious conspiracy. Heck, there are grounds to federally prosecute Trump for pressuring Georgia’s top election official to commit fraud by reversing Joe Biden’s statewide win. Lest we forget, Trump was caught in a phone recording saying: “I have to find 12,000 votes…So what are we going to do here, folks? I only need 11,000 votes. Fellas, I need 11,000 votes.”

Still, there are potential downsides for Garland. If he does decide to do his job, in accordance with “the facts and the law,” he’ll risk a violent backlash anyway. Plus, the coup crowd and their right-wing media cheerleaders will move to impugn the DOJ’s credibility and assail it as a hotbed of partisan jackbooted socialists or whatever. (But that’s already happening. Recently on his podcast, Steve Bannon ranted that Garland plotted to illegally remove Trump from office after the 2020 election: “I can show you a coup and we will show you a coup…We’re going to connect hard dots.” Um, Garland didn’t get the attorney general job until March 2021.)

So, for Garland, is doing nothing really a viable option? What happens to the concept of justice if he surrenders to the mob? Laurence Tribe, the esteemed law professor, warns: “Looking backward as well as forward is essential if we’re to avoid falling over the cliff that lies ahead.”

Heck, looking backward is what prosecutions are all about – holding people accountable for the wrongs they’ve already committed, signaling to future potential criminals that they too would be held accountable. Garland can start by prosecuting Bannon for defying the subpoena issued by House investigators who want to know what he meant when he declared in a pre-Jan. 6 podcast that “all hell is going to break loose.”

As the novelist William Faulkner famously wrote, “The past is never dead. It’s not even past.”