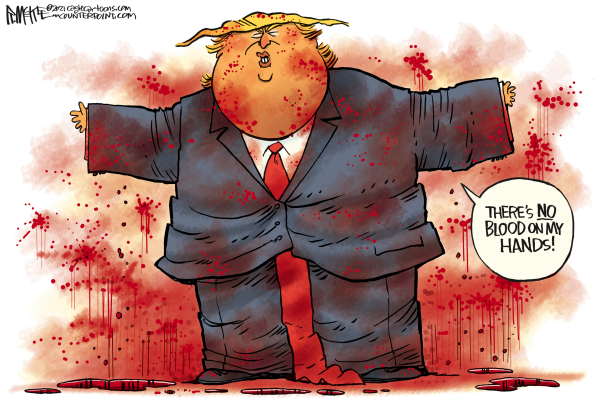 Journalists have been debating how to most effectively cover a defeated ex-president who lies as he breathes and aspires to restore his reign by any means necessary.

Donald Trump has an iron grip on his cultish party, so it’d be a dereliction of duty to ignore him – and the existential threat he represents. But by indulging him in an interview, does that not give him more oxygen?

I’m happy to report that Steve Inskeep at NPR found a way Monday to thread the needle. The solution is to over prepare, give the listeners and the readers as much context as possible, and push back in real time whenever the liar lies.

INSKEEP: It is not true that there were far more votes than voters.

Inskeep gave Trump air time to recycle his lie that he actually won Arizona but that it was stolen by voter fraud. But instead of letting the lie stand unchallenged, NPR checked in with Arizona’s Republican election officials – who recently conducted a ballot review and reaffirmed Joe Biden’s statewide win. The posted NPR story says this:

Republican officials in Maricopa County (the most populous and pivotal county) debunked the characterizations of Trump and his allies in a 93-page rebuttal issued last week. “The people who have spent the last year proclaiming our free and fair elections are rigged are lying or delusional,” said Bill Gates, the GOP chair of the Maricopa County Board of Supervisors.

At another point in the interview – which NPR had sought for the last six years – Inskeep reminded Trump that he lost all of his post-election court cases. This exchange was revealing:

INSKEEP: Let me read you some short quotes. The first is by one of the judges – one of the 10 judges you appointed – who ruled on this. And there were many judges, but 10 who you appointed. Brett Ludwig, U.S. District Court in Wisconsin, who was nominated by you in 2020. He’s on the bench and he says, quote, “This court allowed the plaintiff the chance to make his case, and he has lost on the merits.” Another quote, Kory Langhofer, your own campaign attorney in Arizona, Nov. 12, 2020, quote, “We are not alleging fraud in this lawsuit. We are not alleging anyone stealing the election.”

TRUMP: When you look at Langhofer, I disagree with him as an attorney. I did not think he was a good attorney to hire. I don’t know what his game is…

He maligned one of his own lawyers, and didn’t even bother to address the fact that 10 of his own judicial appointees had ruled against him in case after case (including his Hail Mary in Pennsylvania). All told, NPR accurately observed: “Repeatedly in the interview, Trump presses his party to adhere to his point of view and false claims…That’s a typical strategy among purveyors of disinformation and misinformation.”

And this was a fun exchange, Trump being unable to fathom how Biden won without drawing huge crowds in the midst of a pandemic:

INSKEEP: If you’ll forgive me, maybe because the election was about you.

The interview was scheduled to last 15 minutes. But at the nine-minute mark, when Inskeep started to bring up the Capitol insurrection, Trump hung up. Inskeep exclaimed, “Whoa whoa whoa, I have one more question!” Alas, his guest had cut and run to the MAGA cocoon.

Granted, the MAGA crowd doesn’t listen to NPR or read its website. But journalists who have a laudable bias for facts have no rational choice but to do their jobs.

As veteran Washington reporter Barton Gellman said recently, “What we’re for as journalists is truth. And what we’re for as journalists is democracy. We are unambiguously in favor of our democratic system and of allowing the people to choose their own leaders. And the conundrum is that right now we have a political party that is bowing to authoritarian forces, that is systematically lying about the political process, about the election process itself.”

The only way forward – as Inskeep demonstrated – is to hold those forces accountable.