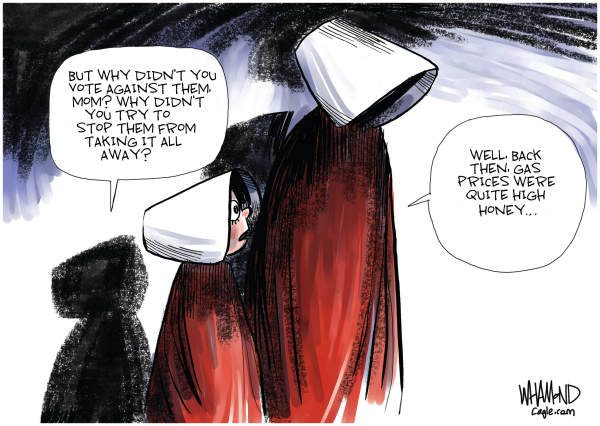 I can’t help but notice that the six Supreme Court justices who criminalized abortion were all raised Catholic.

It’s quite galling (the mildest adjective I can conjure) that they’ve overturned settled law and relegated American women to second-class status by unleashing their worst theocratic impulses. It’s the kind of arrogant fiat you might expect to see in a traditional backwater where Catholic diktats rule the roost – a country like, say, Ireland.

Wait. I need to amend that. Compared to America, Ireland in 2022 is a land of secular enlightenment.

On the issue of abortion, Ireland makes us look exactly like what we’re on cusp of becoming: a reactionary theocracy that threatens to impose forced-birth policy on half the population.

To fully appreciate how far the Irish have come, let’s set the scene. In 1995, when I was a foreign correspondent, I spent two weeks in the Irish Republic, writing about the scads of devout parishioners who were fed up with the Irish Catholic Church. One such lady was Mary Heffron, a mother of seven in the tiny County Mayo town of Moygownagh. She ran the local church choir and prayed in a pew every Sunday. The church had always relied on the Mary Heffrons of the land, and her stolid presence would’ve seemed to indicate that all was well. But no.

She told me: “I’ve had quite a crisis of belief. It’s a bit of a curse to be more educated and aware than ur parents were, because it makes it harder to go to Mass now. I’d love not to go. It’s just gotten very stale, old-fashioned and boring…Last Sunday our priest went after abortion again, and really personalized it, he said how selfish women were for wanting to kill babies. Nothing at all about the circumstances women often find themselves in, or how there were men involved as well. And I sat there, looking around, betting that some of the people there had had abortions, and what was he saying to them? What about mercy and the love of God? How can those women keep coming to Mass and listening to that?”

This was a quarter-century ago, when Ireland – by dint of a constitutional amendment engineered by the church hierarchy – banned virtually all abortions; even rape and incest victims were out of luck. But progressive western thought was beginning to weaken the church’s grip, and the seeds of grassroots discontent were already sprouting, particularly among the young.

Fortunately for Irish citizens, their lives (unlike ours) are not held hostage by unelected judges with absolute power and lifetime sinecures who lie under oath about promising to uphold settled law. In the Irish system, by contrast, the judiciary can be checked-and-balanced by the people – who have the right to vote in national referenda.

And so it came to pass, in 2018, that the people had the opportunity to decide for themselves whether abortion should be legal – in essence, whether conservative church doctrine should still be permitted to dominate policy. A referendum was held.

And legal abortion won in a landslide.

A whopping 64 percent – including 72 percent of women – voted to junk the constitution’s ban. Legal abortion won every age bracket except voters 65 and older, and even 63 percent of the voters in rural counties, where church influence was arguably strongest, said Yes as well. Thirty nine of the nation’s 40 voting districts signaled Yes.

The state minister of health, Simon Harris, approvingly declared that the people of Ireland “want to live in a country that treats women with compassion.” The prime minister, Leo Vadakar, said the vote tally was “the culmination of a quiet revolution that has taken place in Ireland over the past 10 to 20 years. We trust women, and we respect them to make the right decisions for their healthcare.”

Last Friday, Orla O’Connor, an Irish women’s rights activist, recalled that historic referendum: “People had a sense of the legacy of the past, particularly in terms of the Church and how the Church had treated women, but there was a sense that we were not that Ireland anymore.”

Gee, if only American voters had the opportunity to decide for themselves what kind of America they wanted and whether women should be allowed to control their own bodies. We know darn well what the majority would say. But alas, there’s no referenda mechanism here.

I never thought I’d see the day when a modernized Ireland, in a democratic spirit, would embrace social-justice Catholicism – while America, via theocratic fiat, would fall prey to the religion’s most backward misogyny.