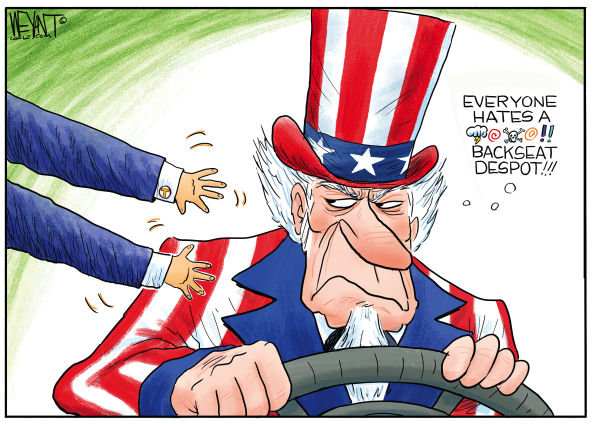 At the start of Tuesday's Jan. 6 hearing, Liz Cheney sent a critically important message to the Justice Department: “Like everyone else in this country, (Trump) is responsible for his own actions and his own choices…Trump cannot escape responsibility for being willfully blind…He is a 76-year-old man, he is not an impressionable child.”

Translation: Don’t let Trump off the hook just because he’s a lunatic living in a fantasy world. For weeks and months, he was repeatedly told that he’d lost fair and square, but refused to face the truth. Given the choice between conceding the race, as tradition required in a democracy, and summoning a violent mob to desecrate democracy, he opted for the latter. But willful blindness is not a defense against criminality.

Liz got that right. As the U.S. Supreme Court ruled in a 2011 case (with Justice Alito writing for the majority), criminal defendants cannot escape responsibility “by deliberately shielding themselves from clear evidence of critical facts that are strongly suggested by the circumstances…defendants who behave in this manner are just as culpable as those who have actual knowledge.”

What we learned, in infuriatingly excruciating detail, was that over a span of six hours on the night of Dec. 18, 2020, Trump met with three of his favorite grifters – Rudy Giuliani, Sidney Powell, and Michael Flynn – in the hopes of reversing his defeat despite the dearth of election fraud. Trump, by this point, had been told for many weeks that his prospects were nil; indeed, two White House attorneys, Pat Cipollone and Eric Herschmann, crashed the grifter bull session and stressed, yet again, that election fraud evidence did not exist.

It was a climactic showdown between the realists and the crazies. There was lots of insults and cursing, with Rudy yelling that Cipollone and Herschmann were “pussies." Cipollone, in his videoed testimony, recalled that the crazies floated the idea of having the U.S. military seize the voting machines. (I can’t believe I just wrote that sentence.)

Cipollone’s reaction, as shared with the Jan. 6 committee: “Having the federal government seize voting machines? That’s a terrible idea for the country. That’s not how we do things in the United States.”

What was Der Leader doing while all this was going on? Weighing which side to embrace – the realists or the crazies. The realists had repeatedly told him there were no legal options, but he was willfully deaf to their counsel. So he chose the crazies; as ex-aide Katrina Pierson later remarked, he “loved the crazies.” Shortly after that grifter bull session ended, in the early hours of Dec. 19, 2020, he posted his now-infamous tweet summoning his acolytes to march on Jan. 6, with the promise “will be wild!”

That tweet prompted his pet demagogues (Alex Jones, et al) to spread the word, and ordinary folks were duly incited. Stephen Ayres, an Ohio cabinetmaker who recently pleaded guilty to disorderly conduct at the Capitol, testified in person: “I followed President Trump on all the websites. He basically put out (word of) the rally, I felt I needed to be down there…We were basically just following what he said…I was hanging on every word.”

Others in Trumpworld knew exactly what he was doing. Brad Parscale, one of Trump’s many former campaign managers, lamented in a Jan. 6 text to Pierson that he was witnessing “a sitting president calling for civil war…I feel guilty for helping him win.” Pierson contended that Trump’s rhetoric wasn’t responsible for the violence and deaths on Capitol Hill, but Parscale tweeted back: “Yes it was.”

It’s gratifying that nearly six in 10 Americans now believe (finally!) that Trump should be criminally charged. And now, as Liz Cheney pointed out, there is bountiful evidence that he was willfully blind to the irrevocable facts and truth of his defeat; that he opted instead for havoc, in violation of numerous federal statutes.

As Barbara McQuade, a law professor and former U.S. attorney, said in a recent New Yorker interview, prosecutors have the easiest time if a defendant confesses that he consciously knew his actions were wrong – but “you can still obtain a conviction (when) a jury is told that they should look at the totality of the circumstances and draw reasonable inferences based on their own common sense and life experiences. If someone tells you 100 times that the world is round and you think, ‘Geez, the world looks flat to me,’ at some point, if you continue to deny the world is round, you really know better. You are engaging in willful blindness to say the world is flat, and to sell people things on the basis that the world is flat.”

In the best of all possible worlds (to quote Voltaire’s Candide), Trump will sell his grifts only to fellow inmates.

Dick Polman is the national political columnist at WHYY in Philadelphia and a "Writer in Residence" at the University of Pennsylvania. Email him at [email protected]m.
View Full Archive