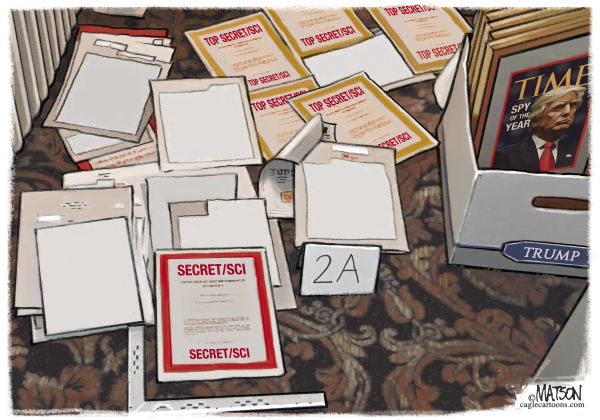 Trump’s sweat-soaked defenders are freaking out about a FBI photo of classified documents from Mar-a-Lago and fumbling for fresh rationalizations – they say it’s “staged” and “dishonest."

Meanwhile, the thief-in-chief is veritably chewing his grandiose carpet about the way “his” top-secret documents were treated during the Aug. 8 search: “They (FBI agents) took them out of cartons and spread them around on the carpet, making it look like a big ‘find’ for them. They dropped them, not me – Very deceiving.”

Why are they all so upset? Because they respect – and, in this case, they fear – the power of the visual image. Because now the average American who has no time to read abstruse court filings can measure the depth of Trump’s crimes with merely a glance.

Psychologists have long concluded that humans are far more likely to remember something they see, as opposed to what they read or hear. Historians have long noted that even Cicero, the legendary Roman orator, brought visual props to enhance his eloquent speeches. But we need not reference ancient history. Richard Nixon “lost” the 1960 presidential debates in part because his TV makeup made him look more haggard than JFK. Mike Dukakis, the 1988 Democratic candidate, was forever branded as a dork because he looked diminutive while riding in a military tank.

The late French philosopher Jacques Ellul said that the visual image “locks us up…and obliges us to look. The visual image is always rigorous, imperative, and irreversible…You cannot dispute with an image.” And that’s why Team MAGA’s attempts to dispute the FBI’s image have been so desperately hilarious.

Start with the complaint that the photo was “staged.” Of course it was! It’s standard law enforcement practice for federal agents to lay out the evidence seized in a legal search – and to catalogue those seized materials by snapping evidentiary photos. Imagine how stupid it would sound if drug dealers, after being raided by police, tried to complain that their guns and cash were being unfairly depicted in “staged” photos.

But what’s most delicious are some of the last-ditch defenses that have only made Trump look more guilty.

When Trump fumed on his social media site that the FBI agents took the classified documents “out of cartons and spread them around” in his office, he basically confessed that he’d been hoarding the stolen goods in those cartons in his office. And his fourth-tier lawyers are just as dumb as he is. Alina Habba told Fox News that her client would never have strewn those documents on the floor: “That is not the way his office looks. He has guests frequently there.” Thank you, Habba, for confirming that national security materials stolen from Washington were stashed in an office where “guests” came and went.

(Hanna also said that the FBI is trying to persecute Trump with “three mundane statutes: espionage and the two others – obstruction.” It’s news to me that espionage is a “mundane” offense; during the Cold War, it was serious enough to fry the Rosenbergs in the electric chair.)

And the Trump camp has only itself to blame for the release of that evidentiary photo. The Justice Department shared it with the public only because Trump keeps going to court seeking to impugn the legal search. As the government’s rebuttal, that photo is a smoking gun. One marketing expert has pointed out: “We respond to and process visual data better than any other type of data. In fact, the human brain processes images 60,000 times faster than text, and 90 percent of information transmitted to the brain is visual.”

So when a visual image speaks for itself, there’s only so much one can do to spin it away. Karl Rove, the ex-Bush Republican swami, didn’t even bother to try. He told Fox News on Wednesday: “Let’s be clear on this. None of these government documents are his to have taken. A lot of the former president’s problems are of his own creation. Under the Presidential Records Act of 1978, you cannot take original documents out of the White House when you leave, whether it’s the president of the United States or any of his aides. It’s verboten under the law.”

In fact, let’s contrast that evidentiary photo with something Trump said at a campaign rally on Aug. 18, 2016: “In my administration, I’m going to enforce all laws concerning the protection of classified information. No one will be above the law.”

Yes indeed, some spoken words are memorable after all.