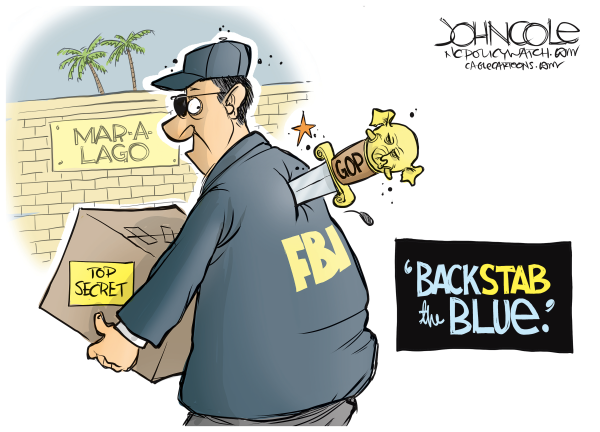 It shouldn’t come as that much of a surprise that right-wing news media outlets wasted no time stoking the unhinged rage of their MAGA followers last week after the FBI carried out a search warrant at Donald Trump’s Mar-a-Lago residence.

While it is hardly news that the far-right routinely engages in bombastic, incendiary rhetoric, many outlets — along with a number of their more high-profile personalities — suggested, encouraged and outright advocated violence.

MAGA-world denizens rushed to social media calling for violence, causing the phrase “civil war” to trend on Twitter. One user on Trump’s social-media platform, Truth Social, said, “F—k a civil war, give them a REVOLUTION. We out number all of the 10 to 1.”

Commentators in right-wing media have been using extraordinarily reckless and inflammatory language. The Gateway Pundit, a staunchly pro-Trump website, stated “This. Means. War.” Former Trump adviser Michael Caputo said, “With this militant raid on President Trump’s home, we have become Russia. The FBI is the KGB.” The cynical “Trump is always right” Fox News commentator and host Dan Bongino called the FBI’s action “some third-world bulls—t.”

A plethora of right-wing personalities eagerly added kerosene to an already raging fire. Former Speaker of the House Newt Gingrich suggested the FBI might have planted evidence against Trump. Fox News host Jesse Watters snidely hinted the FBI was setting up Trump. Sebastian Gorka, a former Trump adviser who is now a radio host, claimed the FBI’s actions were “a declaration of war.” Former Fox News contributor Monica Crowley, another former Trump administration official, tweeted, “This is it. This is the hill to die on.” Chronically intellectually dishonest Fox News host Mark Levin had the gall to say: “This is the worst attack on this republic in modern history, period… This is a Stalinist hunt.”

The truth is the FBI lawfully executed a warrant signed off by a judge seeking classified documents that Donald Trump confiscated at the end of his presidency and refused to return. Nothing untoward or sinister has been revealed about the FBI’s motives. The truth is many — if not all — of the individuals quoted knew law enforcement officials were just doing their job. Shame on them.

Instead of trying to help cool and lower the passions of their supporters by encouraging them to let the legal process play out and wait to see what information eventually emerges, many on the right immediately riled up their already defensive and paranoid base of supporters to assume Merrick Garland and the Justice Department had sinister intentions. The hostility has garnered a spike in death threats against judges, journalists, and law enforcement officials.

Ricky Shiffer, a 42-year-old former veteran who spent three years in the Navy where he handled classified information, was killed in a shootout with agents at an FBI field office in Cincinnati. Shiffer was also connected to an extremist group that participated in the Jan. 6 attack on the Capitol. A supporter of the Proud Boys and other extremist groups, he advocated for a “call to arms” on his webpage. Numerous direct threats from die hard right-wing individuals abounded for days.

Garland delivered a speech on August 11 where he declared he did indeed authorize the search for good reason, and adamantly defended the men and women who work for the bureau. Suddenly realizing they had been put on the defensive, many segments of the conservative right suddenly went silent. Some Fox News hosts went so far as to attack certain conservative factions, chastising them for attacking law enforcement, retreating from their traditional support of “blue lives matter” and accusing many in their base of hypocrisy.

What we have seen over the past week is that the current Republican Party is bereft of any sense of responsibility. The agenda for their most extreme elements is to employ rhetoric that is alarming, abrasive, hyperbolic and ominous, no matter how irresponsible or dangerous. The more outlandish they can appear to their followers, the better. Ethics, civility, decency, facts, principles and morality can all be damned.

Such reductive values certainly do not bode well for the future of our increasingly fragile democracy.