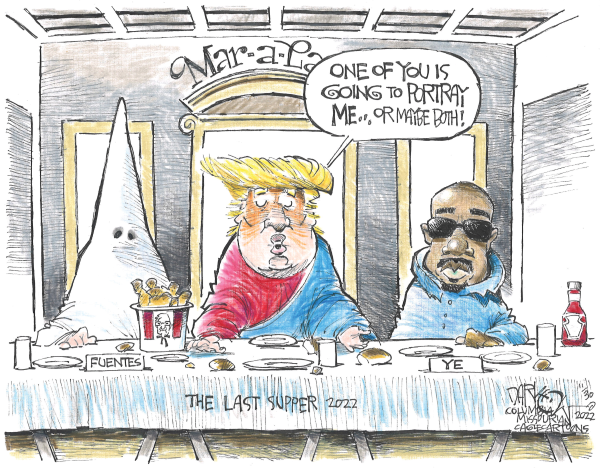 Critics from across the political spectrum — including some reluctant Republicans — called out the former president and urged him to take a more aggressive stance in denouncing anti-Semitism.

“I don’t think it’s a good idea for a leader that is setting an example for the country or the party to meet with an avowed racist or anti-Semite,” Arkansas Gov. Asa Hutchinson, a Republican who has said he is considering a 2024 presidential bid, said on CNN. “It’s very troubling and it shouldn’t happen.”

"Anti-Semitism is a cancer," tweeted Mike Pompeo, Trump’s former secretary of state. "This is just awful, unacceptable conduct from anyone, but most particularly from a former President and current candidate."

“To my friend Donald Trump, you are better than this. Even a social visit from an anti-Semite like Kanye West and human scum like Nick Fuentes is unacceptable,” David Friedman, the ambassador to Israel under Trump, wrote on Twitter. .

President Biden deflected a question about the dinner over the weekend, telling reporters, “You don’t want to know what I think.”

In typical Trumpian fashion, the twice-impeached former president defended his behavior by pretending to be a good Samaritan.

"So I help a seriously troubled man, who just happens to be black, Ye (Kanye West), who has been decimated in his business and virtually everything else, and who has always been good to me, by allowing his request for a meeting at Mar-a-Lago, alone, so that I can give him very much needed 'advice,'" Trump wrote on his Truth Social platform. He added in a later message, "Why wouldn’t I agree to meet? Also, I didn’t know Nick Fuentes."

Fuentes is a 24-year-old who promotes white nationalism through online platforms. The FBI has called him a white supremacist in court documents. He has also questioned the Holocaust, according to the Anti-Defamation League.

One would have to be dangerously naïve to believe Trump doesn’t know about white supremacists like Fuentes and their support of him. The truth is he has a long and disturbing history of failing to repudiate hate speech. Some of his supporters include the Daily Stormer, a leading neo-Nazi news site; Jared Taylor, editor of American Renaissance, a Virginia-based white nationalist magazine; and Michael Hill, head of the League of the South, an Alabama-based white racist organization.

During his controversial presidency, Trump made outlandish comments directly emboldening white nationalists. He said there was “blame on both sides” for the violence in Charlottesville, which included the death of 34-year-old Heather Heyer.

He was an adamant proponent of the Barack Obama birther theory, initially claiming the nation’s first Black president was not born American by birth. He later recanted his dishonest remarks during a sham press conference to promote the grand opening of one of his hotels.

Sadly, Trump’s appeal to bigots is nothing new.

Over the years, Trump has said that Black people have an inherent laziness about them that is probably genetic in nature and referred to Covid-19 as the “Kung Flu” and the “Chinese virus.” He calls Mexicans “criminals” and “rapists” and trying to ban Muslims from entering the U.S. He also referred to African and Latin American nations as “s—-hole countries.”

Perhaps one of the most telling examples of Trump’s appeal to bigots was the comment made by an unnamed man cited as the "Imperial Wizard" of the Rebel Brigade Knights of the KKK. He said the reason a lot of Klan members like Trump is “because a lot of what he believes, we believe in.”

Not much else needs to be said.