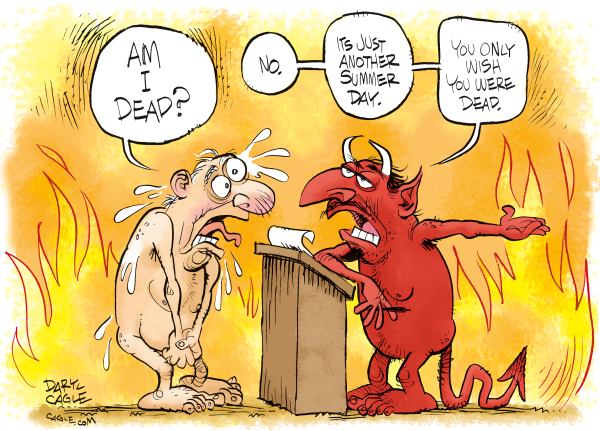 East Texas is hot, and not in the way you compliment your wife when she’s mad at you for performing an epic cannonball while she’s lounging by the pool with her laptop.

For the past few weeks, Texas (and much of the world) has been suffering through a distressing phenomenon known as summer – that time of year when we all remember what it’s like being toddlers walking around with drenched undergarments.

I realize that my opinion may seem blasphemous to those who enjoy a good lower-body heat rash, but I’ve always preferred the fall and winter over summer. Yes, I get bushy-tailed at the first hint of pumpkin spice wafting through my ample nose hairs. Besides, when you’re cold, you can always put on more clothes, but when you’re hot, you can only take off so much without getting arrested or traumatizing your family members and pets. Just ask our cat.

This summer has been particularly brutal so far, with temperatures regularly reaching the triple digits and placing everyone’s lawn in hospice care. Our home air conditioner has been running non-stop for approximately four weeks and is now demanding a significant raise, enhanced benefits and casual Fridays. Yet I still have to expose at least one whole leg and an elbow outside of the bed covers at night (and risk being attacked by monsters) in order to sleep.

When I asked my wife about our latest electric bill, she refused to show it to me, simply suggesting that I find a second job and develop a taste for bologna sandwiches – minus the bologna.

Some families take the opportunity this time of year to vacation in cooler climates where deodorant actually works and you don’t have to wring out your briefs after waking to or from your car. But not our family. This summer, I took my wife and three teenage daughters on a road trip to sample the sweltering delights of New Orleans, Louisiana, where being outside during the summer is like walking around in a wet fur coat after wearing it in a hot tub full of gumbo. And we just returned from a short excursion southward to San Antonio, Texas, (named after the patron saint of scorching parking lots) – because it’s always smart to get as close to the equator as possible in early August.

Due to the extreme heat and the dangers associated with it, numerous media outlets are offering tips for surviving in navel-soaking temperatures. Here are a few of my own:

1. Stay hydrated, meaning you should drink as much fluid as possible so that you can spend lots of time enjoying the refreshing confines of an air-conditioned restroom. (The porcelain is delightfully cool.)

2. During the hottest part of the day, keep family pets indoors – where they can annoy you more effectively with their incessant noise, booty scooting, and staring at you when you snack. The same applies to children of any age.

3. Eat small meals, and eat more often. I’m not sure why this works, but I’m for it, especially the “more often” part.

4. Check on the elderly (and ask them to prepare you a meal if possible-see No. 3).

5. Set the air conditioner to a low temperature, and keep it there. If you’re worried about your electric bill, remember the bologna sandwiches (or see No. 4).

America experienced a previous heat wave in 1980 when I was ten years old, and my main concerns were catching the next episode of The Muppet Show and sorting out my strange new feelings for Brooke Shields. I don’t remember much about the weather, other than it was summertime and people were walking around in t-shirts that read, “I survived the 1980 Texas Heat Wave.” I guess I thought it was kind of cool, but not cool enough to distract me from Miss Piggy and Brooke in her Calvin Kleins.

These days, though, I take assaults on my sweat glands more seriously, and I hope you, too, will benefit from the tips I’ve offered as we all pray for cooler temperatures and sales on Wonder Bread and bologna.