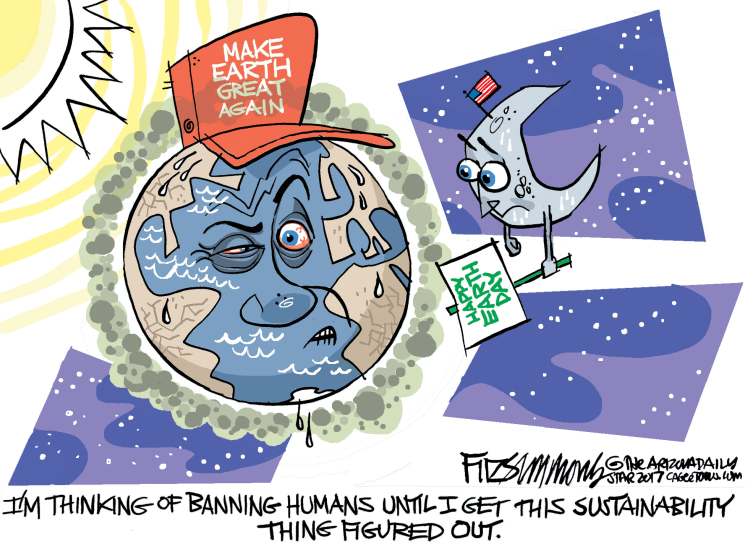 Fifty years ago, in 1969 when astronaut Neil Armstrong became the first person to walk on the moon, the world's population was 3.6 billion; in 2019, it's 7.7 billion. A half a century ago, the U.S. population stood at 208 million; today, it's 329 million and growing at the unsustainable rate of one net person every 17 seconds, a total calculated by the sum of births minus deaths, plus net migration.

April 22, 2019, marks the 49th anniversary and 50th observance of Earth Day intended to raise awareness and appreciation for the earth's natural environment. A massive oil spill off the Santa Barbara, California, coast that generated a slick large enough to encompass Chicago provided the catalyst for the first-ever Earth Day, celebrated in 1970, and currently recognized in 193 countries.

At the time, there was an understanding of the impacts of polluting and overpopulating our planet. While the former continues to be the driving element for environmentalists and climate change activists, such is not the case for overpopulation. But the challenges to achieve U.S. population stabilization remain, and they are daunting, even if unmentionable and not addressed.

To the exclusion of a sustainable country, the U.S. government is committed to endless growth, a policy that congressional leaders have embraced for decades, and is perhaps the most significant roadblock to population stabilization. Nobel laureate Steven Chu of the University of Chicago's Energy Policy Institute said at a recent forum that "the world needs a new model of how to generate a rising standard of living that's not dependent on a pyramid scheme," a reference to increasing immigration.

The former Secretary of Energy under President Obama also referred to the idea of replacing aging persons with younger immigrants as an ecological Ponzi scheme that leaves future generations to deal with the life-altering consequences. Young immigrants will eventually grow old, and true to a Ponzi scheme's formula, another immigrant wave will be needed to replace the aging migrants, etc. ad infinitum.

An inconvenient truth in the effort to achieve sustainability is that immigration policy is the leading single factor in the destruction of open space. Each year, the U.S. admits more than 1 million legal immigrants who, over time, petition an average 3.5 of their family members to join them. The blame lies not with the immigrants, but with Congress for refusing to defend the natural environment of America. Logically, immigrants, just like most Americans, want and need more urban development for housing, schools, health care, governmental services, streets, parking, waste handling, workplaces, shopping, arts, recreation and worship.

In a 2001 interview with the Milwaukee Journal-Sentinel, Earth Day founder Sen. Gaylord Nelson said that the larger the population, the more serious problems become. From crime and health care shortages to infrastructure issues, no problem is helped by adding ever-more people. To no avail, Sen. Nelson during his lifetime urged Congress to responsibly address the population issue.

Americans will have to wage the fight for environmental stability on their own. Congress is determined to raise immigration levels, and the President seems to be plotting to join them in the name of economic growth. Environmental groups long ago abandoned reducing immigration as the first step toward ecological constancy. Journalists also refuse to connect the dots between immigration-driven overpopulation and the loss of key, irreplaceable natural resources in a discouraging failure from the Fourth Estate.

The nation's battle should begin with cutting carbon emissions which have reached record highs. The International Energy Agency reported that U.S. oil demand grew at its fastest pace in a decade while China and India burned more coal. The "spectacular growth" of the U.S. economy is, according to the IEA, the main culprit in the carbon emissions spike.

Since population stabilization is crucial to America's future, and will determine how residents live, a thoughtful conversation that includes immigration as a crucial variable must take place soon. Refusing to engage intelligently means the status quo will continue, as will the loss of America's precious land and resources.

Do you love state welcome centers? by Danny Tyree
My family made a recent day trip to a neighboring state, so I decided this week’s column should be a tip of the hat to those oases of the interstate highway system, the state welcome centers. Whether you’re a vacationer, traveling businessp ...
If you can’t beat the heat, join it