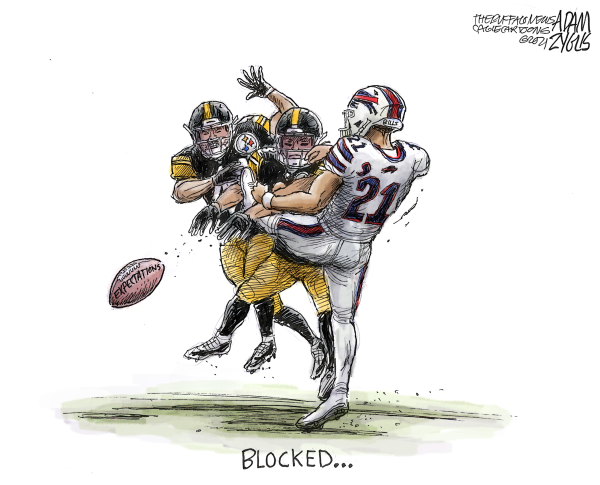 The 2021 National Football League season is underway, with the Pittsburgh Steelers starting the season 1-0 after dispatching the Buffalo Bills.

Even though the Steelers played on enemy turf in Buffalo’s Highmark Stadium, the Yinzers felt right at home. The Pittsburgh contingent among the 70,000 football-starved fans encouraged the Steelers by waving thousands of Terrible Towels. Wherever the Steelers play, loyal followers wave their black and gold towels with abandon. No matter the occasion, there’s a towel to match.

Around Pittsburgh or online, fans can buy towels for about $10 that celebrate Thanksgiving, Christmas, Independence Day, Halloween and St. Patrick’s Day. Steelers’ fans have taken their towels to Iraq, Afghanistan, the top of Mount Kilimanjaro, Mount Everest’s peak, the International Space Station, the South Pole, the Great Wall of China and Vatican City. A pink towel, introduced in 2009, promotes breast cancer awareness.

At Heinz Field, a Terrible Towel Wall displays each of the special edition towels for the Steelers’ worldwide, stadium-visiting fans to admire. The towel is hung over televisions and radios during game time, and is often used as a fun drape for pets and babies. When Steelers’ receiver Hines Ward won the 2011 Dancing with the Stars’ Mirrorball Trophy, his former teammate and Hall of Fame running back Franco Harris urged him on by twirling his Terrible Towel.

But few non-Yinzers know the touching legacy behind the towel, which is much more than evidence of Steelers’ excellence, and the team’s passionate fan base.

Here’s the towel’s wonderful backstory: Myron Cope, a beloved Steelers’ broadcaster, the team’s voice for 35 years, and a National Radio Hall of Fame member, created the towel in 1975, and it debuted on December 27 in a winning playoff game against the Baltimore Colts.

From that moment on, fans and players considered the towel the team’s lucky charm, as the Steelers, in the following weeks, defeated the Oakland Raiders and the Dallas Cowboys, and then won Super Bowl IX, beating the Minnesota Vikings, 16-6. The Steelers’ successful play helped towel sales take off.

In 1996, Cope turned the towel’s trademark over to the Allegheny Valley School (AVS), which has several campuses and group homes throughout Pennsylvania, and operates more than 125 programs across Pennsylvania designed to help the developmentally disabled. Cope’s son, Danny, once attended. Danny, who has never spoken a word and is today 54, enrolled in 1992. Thanks to the loving care he received at AVS, Danny eventually moved on to a meaningful assembly line job at a major snack food company.

AVS receives each penny of profit from towel sales. Cope specifically outlined how the school must spend the proceeds. Each dollar goes to benefit residents and must not go into the general construction fund. The money is earmarked for, among other essentials, specialized wheelchairs and programs that will enable the most challenged to turn on lights or music by merely blinking their eyes. As the school’s then-chief executive officer, Regis Champ, said: “Our needs are daily.”

Steelers’ administration manages the marketing of towels and then cuts a check, usually in the low five figures, payable to the school. When the Steelers play in the Super Bowl, sales often exceed $1 million. Some eager fans have purchased 200 towels at a time. Since Cope donated the Terrible Towel’s trademark, sales have generated more than $3 million for AVS.

As Champ recalled the glorious day that the towel’s rights were transferred to AVS, Cope came into his office with a pile of documents, threw them down on his desk and said, “‘Regis, I’m giving you the Terrible Towel.’ I was speechless. I knew that this would be the legacy that outlived Myron.”

In 2008, Cope, age 79, passed away. His daughter Elizabeth draped Cope’s coffin with a quilt that a fan made out of Terrible Towels and sent to the Cope family.

Whether you are a Steelers fan or not, remember that Terrible Towels promote a most worthy cause, helping autistic people get on the road to living normal lives.