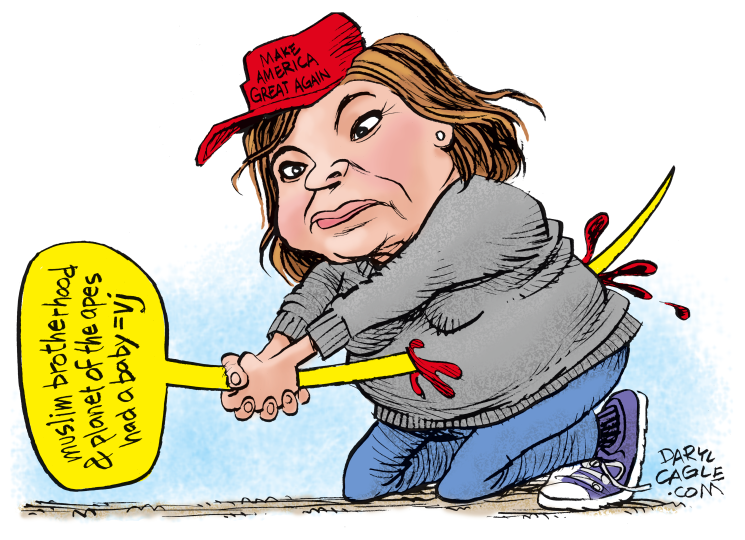 What we say to each other, how we treat each other matters.

There are basic norms of civilized behavior, outside the realm of politics, beyond the reach of cable network news, that we should all be able to agree upon.

One of them is that, if you call an African-American woman an “ape,” that you are the worst kind of vile racist. And you deserve whatever scorn, whatever vitriol, whatever criticism that comes your way as a result of your actions.

But because of the remove of social media, because the forces at the very top of the American power structure have normalized the worst kind offensive behavior, there’s somehow a difference.

Because we live in the times that we do, those same disgusting words, uttered by the comedienne Roseanne Barr, about the former Obama administration adviser Valerie Jarrett, who is African-American, are being inevitably viewed through the filter of partisan politics.

And that means, to some, they are, as shockingly, mystifyingly, horrifyingly as it seems, entirely acceptable.

That sadly unsurprising sentiment came through loud and clear on Wednesday morning when a reader decided to share his views on my office voicemail.

“Yes, I would like to show my support for Roseanne Barr,” he began. “The Muslim Brotherhood, The Planet of the Apes. Yeah, you have a perfect Valerie Jarrett. I studied this picture last night. What’s wrong with saying something like that? Oh, all the butt-hurt liberal media. You know what? I hope they all drop dead because Roseanne is right. And that lady … woman is a b***h anyway.”

That’s one of your neighbors. One of your colleagues. The guy in front of you in the supermarket checkout line. The person sitting next to you in church.

That’s the hateful voice of racism here in central Pennsylvania. And if he were the only one, a lone whack-job crying out in the wilderness, that’d be one thing.

He’s the extreme end of a spectrum that starts with the sort of ignorant prejudice that prompted Starbucks to close its shops on Tuesday to conduct sensitivity training for its employees.

“Much love @therealroseanne. We live in a country were people don’t respect our constitution. One of most essential freedoms is freedom to express ourselves even if it makes others upset. It’s beautiful to think different. Shame on the leftist media,” Republican Omar Navarro, who’s running against U.S. Rep. Maxine Waters, D-Calif., tweeted Wednesday.

There is no universe, there is no moral plane where what Roseanne Barr said is even remotely acceptable.

It wasn’t funny. It wasn’t a joke.

And it wasn’t the first time, either.

As Christine Emba of The Washington Post writes, Barr has “a history of making inflammatory statements and pushing right-wing conspiracy theories – whether it’s lending credence to a bizarre theory that Democrats ran a pedophile ring; making wild insinuations about the death of Democratic National Committee employee Seth Rich; or accusing businessman and philanthropist George Soros of Nazism and attempts to undermine American democracy.”

And because Barr has a platform, a voice, it emboldens others.

Some among you will say that Barr had a First Amendment right to say what she said. And you’d be right. But the First Amendment doesn’t shield her from the consequences of her actions.

Her employer, Walt Disney Entertainment and ABC, which knew what it was getting from Barr when they hired her and green-lighted her show anyway, fired her, calling her tweeted words “abhorrent, repugnant and inconsistent with our values.”

Barr has since blamed her racism on the sleep drug Ambien, prompting its manufacturer, Sanofi, in some serious Twitter shade, to release a statement asserting that racism is not among the medication’s known side effects.

In the end, though, it’s on the rest of us, Republican, Democrat, independent, Christian, Jew, Muslim, or nothing at all, to simply stand up and say enough, to forcefully assert, that racism has no place in our midst.

Whether that’s on our TV screens or at the highest levels of power.