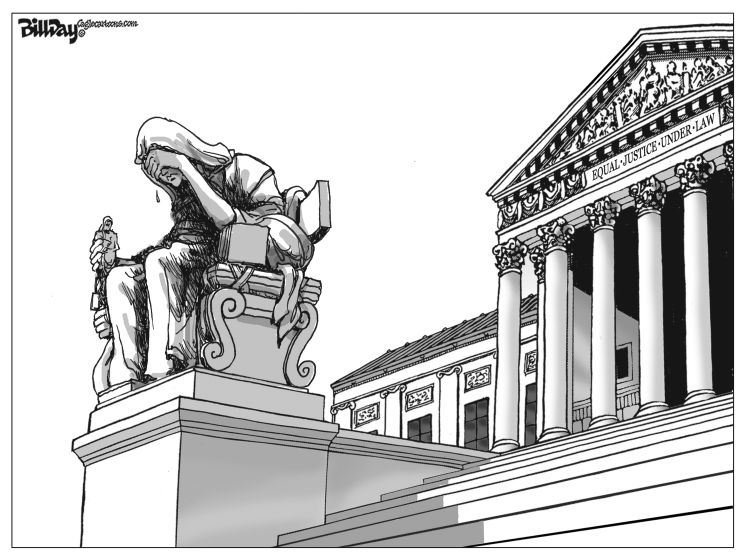 Remember that time you got due process in a job interview?

Time and again last week, as the excruciating drama surrounding the Supreme Court nomination of Judge Brett Kavanaugh unfolded before the Senate Judiciary Committee, the phrase “due process” was batted around so much, and with such abandon, that it was in danger of looking like the remnants of pinata after a Beltway prep school’s Cinco de Mayo bash.

Yes, Kavanaugh deserved to have his say after Dr. Christine Blasey Ford levied an accusation of sexual assault at a high school drinking party in suburban Washington D.C. more than three decades ago.

But it was nearly impossible to escape the impression that the dueling testimony from Blasey Ford and Kavanaugh on Thursday was a mere speed bump on the way to Kavanaugh’s inevitable elevation to a lifetime appointment to the highest court in the land.

Where, keep in mind, he’d be called upon to adjudicate matters affecting the lives of hundreds of millions of American women.

Blasey Ford handled herself with dignity and grace for a woman clearly terrified by her circumstances and the gravity of having to spill out the most intimate details of her life for 11 skeptical white men in the Republican majority who cowered behind a veteran sex crimes prosecutor.

Further, her testimony was believable and credible – the only standard that matters in this instance. It wasn’t beyond a reasonable doubt. It didn’t have to be.

Because it wasn’t a criminal trial.

Kavanaugh, meanwhile, shredded the concept of “judicial temperament,” angrily assigning responsibility to everyone – from the Clintons to committee Democrats for the situation he had found himself in.

At points, Kavanaugh said the proceedings were “a national disgrace,” a “circus,” a “grotesque and coordinated character assassination” and a “search and destroy” mission. He accused Democrats of waiting to attack him with “last-minute smears.”

His angry tirade before the committee revealed a deeply partisan core that calls into question his ability to thoughtfully, independently, and without bias, interpret the Constitution.

And that, as has seemingly been forgotten in the midst of a week that’s seen the reputation of the Supreme Court tarnished, and the confirmation process turned into the worst kind of reality-TV drama, is one of the chief standards by which we’re supposed to measure those who would serve on the high court.

Kavanaugh’s vituperative attacks on Democrats brought that into clear question – even if he thought his anger at having to defend himself against a charge he believed untrue wasjustified.

So it at least served the purpose of illuminating Kavanaugh’s character, a key component of any job interview. And it was a far cry from the self-styled choir boy who showed up on Fox News earlier in the week.

And then, even as it looked like Judiciary Committee Republicans were going to turn farce into tragedy by reporting Kavanaugh’s nomination to the floor with barely 24 hours of deliberation, something improbable happened.

Retiring Sen. Jeff Flake, R-Ariz., a swing vote who’d announced only hours earlier that he planned to vote to confirm Kavanaugh, asked for a one-week delay so the FBI could conduct a more thorough background investigation.

You couldn’t help but wonder if Flake’s nationally televised shaming by a sexual assault survivor in a Senate elevator gave him pause. Flake was soon joined by Sen. Lisa Murkowski, R-Alaska, who agreed with Flake’s call for a delay.

With their 51-49 majority on the line, and with two key lawmakers defecting, Senate Republicans had no choice but to give their assent.

Senators – and the constituents they represent – deserve to be armed with all the facts before they cast a generational vote to confirm someone to the Supreme Court of the United States.

If there is due process at all,it’s for the 325.7 million Americans who will be required to live with the consequences of Kavanaugh’s potential jurisprudence for decades to come.

He is not entitled to a Supreme Court appointment, not by a long shot.

Justices, senators, every public official, works for the taxpayers who pay their salaries, not the other way around.

And if the people asking for the privilege of serving tank during their interview, there is no due process.