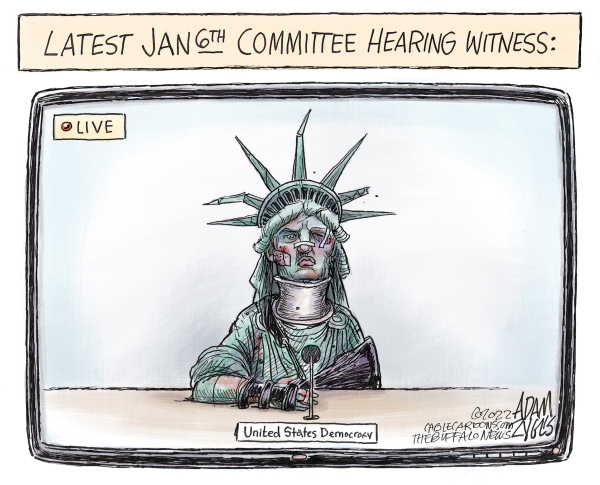 If you want to know what the slide into fascism looks like, go back and review Tuesday’s session of the U.S. House committee investigating the Jan. 6, 2021 insurrection at the U.S. Capitol.

It was a tragic parade of public servants relaying the vile acts of harassment they were subjected to as they did the hard work of making sure the wheels of American democracy turned smoothly during the 2020 election.

There was Georgia election worker Wandrea “Shaye” Moss, who, along with her mother, Ruby Freeman, were harassed by Trump supporters after the former president publicly falsely accused them of engaging in voter fraud.

Freeman said the FBI told her that she had to leave her home for her own safety and stayed away for two months to escape the danger, she told the committee in taped testimony.

“It was horrible,” she said.

And you don’t have to agree with – or even like – Pennsylvania House Speaker Bryan Cutler to be repulsed by the same harassment he and his family were subjected to by Trump loyalists and their enablers.

Cutler, of Lancaster County, the top Republican in the state House, revealed that he was bombarded by near-daily calls from Trump lawyers Rudy Giuliani and Jenna Ellis, as they sought his support in illegally toppling the results of the 2020 presidential election.

The calls from Giuliani and Ellis, now an adviser to Pennsylvania Republican gubernatorial nominee Doug Mastriano, persisted even after Cutler, who described the outreach as “inappropriate,” asked them to stop.

“I understand that you don’t want to talk to me now,” Giuliani said in another message. “I just want to bring some facts to your attention and talk to you as a fellow Republican.”

Cutler also discussed the impact that Trump supporter Steve Bannon’s calls for protests outside Cutler’s home and district office had on him and his family. In one instance, Cutler’s 15-year-old son was home alone as protesters massed outside, according to the Washington Post.

In newly released footage, Cutler said he was forced to “disconnect [his] home phone for about three days,” after his personal information was shared online. Cutler said his phone “would ring all hours of the night and fill up with messages,” as the Capital-Star’s Marley Parish reported Tuesday.

Now you can argue that Cutler, an elected official, is fair game for protesters. And you can justifiably say he deserves criticism for joining with 63 other legislative Republicans who sent a letter urging Congress to object to Pennsylvania's electoral votes, which went to now-President Joe Biden.

But there’s no universe where a 15-year-old boy deserves to be terrorized by a crowd after his father’s was doxxed by people who already are subscribing to the lie of the stolen election.

But that’s what fascists do: They bully and intimidate. And they work methodically, as the House committee’s sessions have shown, to undermine the legal underpinnings of the elected government so they can seize power.

And when they don’t get their way, they set their goons loose, as was the case on Jan 6. And they don’t lift a finger to stop them, even when it becomes clear that the lives of the vice president of the United States and other senior officials clearly are at risk.

Fascists purge the disloyal from their own ranks. And when mere rhetoric doesn’t work, they resort to violence – as a horrifying new ad by Missouri GOP U.S. Senate candidate Eric Greitens makes all too clear.

In it, the gun-wielding candidate exhorts his supporters to go “RINO hunting” with him — a reference to so-called “Republicans in Name Only” who are judged not to be toeing the line on orthodoxy.

After the chants of “Hang Mike Pence,” it’s not far-fetched to imagine deranged MAGA supporters taking Greitens both literally and seriously, engaging in their own Night of the Long Knives, as Hitler’s thugs did in 1934 when they took out the paramilitary SA and other opponents of the Nazi regime.

There already are eerie echoes of the 1933 Reichstag Fire in the sacking of the Capitol. In both cases, fascist thugs were looking for a pretext to seize and consolidate their hold on power.

Trumpism is fascism, American-style. And if these committee hearings accomplish anything, they finally will awaken our fellow citizens to the clear and present danger that Trump and his allies pose to our system, so they can move to reject it before it sets fire to our elections this fall and in 2024.

And if they don’t, they can’t claim they weren’t warned. The evidence was staring them in the face.

Why we oooh and aaah on the Fourth of July by Christine Flowers
Whenever the Supreme Court comes down with a particularly momentous decision, it’s customary to look at the majority opinion. After all, the majority makes the law. Sometimes, though, it’s the dissenting opinions that are more interesting, m ...