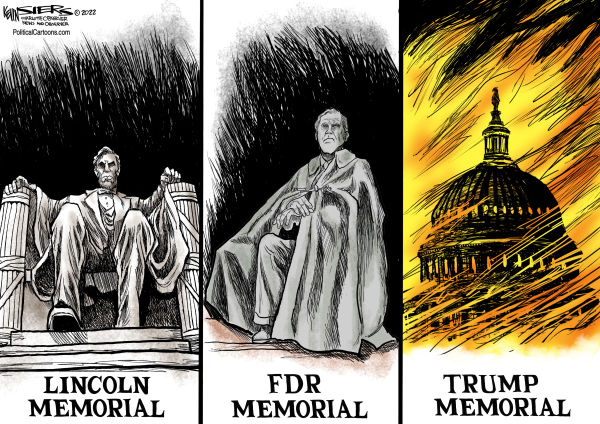 In the last week, two men from Pennsylvania each made headlines for attempting or threatening violence against the FBI after it executed a search warrant at the Florida residence of former President Donald Trump.

One of the men, Adam Bies, was arrested after threatening on social media to “water the trees of liberty” with FBI agents’ blood, according to the Philadelphia Inquirer. He posted the alleged threats to Gab, a social media site favored by right-wing activists.

Another man, Ricky W. Shiffer, who was shot and killed in a standoff with law enforcement after he tried to breach the FBI’s Cincinnati field office, was a Navy veteran who grew up on a farm in Perry County. Shiffer was a poster on the Trump-run Truth Social, which is a hotbed of baseless conspiracy theories and overheated anti-government rhetoric.

And on Wednesday, the Morning Call of Allentown reported that a man who rammed his car into a barricade at the U.S. Capitol last weekend, and who fatally shot himself, once lived in the Lehigh Valley, and had a lengthy criminal record.

The trio incidents were the latest in an escalating chain of acts of political violence and rising rhetorical bile in the 18 months since a horde of pro-Trump extremists stormed the U.S. Capitol on Jan. 6, 2021. Nearly 70 people from the Keystone State have been charged in connection with that horrible day of violence, according to LancasterOnline.

It’s tempting to slot these latest acts of violence in with other incidents of political and economic resistance that litter Pennsylvania’s historical landscape, from the Whiskey Rebellion of 1794 to the Molly Maguires of northeastern Pennsylvania in the late 19th century.

But as The Atlantic’s Tom Nichols writes, while even the Confederates of the Civil War believed they were operating from a position of genuine – if hatefully racist – grievance, the right-wing extremists lashing out in Trump’s name are justifying their actions based on the fiction of a stolen election and the former president’s equally fantastical claims about a lawful search at his residence.

“There is no single principle that unites these Americans in their violence against their fellow citizens.” Nichols wrote. “They will tell you that they are for ‘liberty’ and ‘freedom,’ but these are merely code words for personal grudges, racial and class resentments, and a generalized paranoia that dark forces are manipulating their lives.”

After Bies was arrested, I kept asking myself why his “tree of liberty” rhetoric rang so familiar. It was because Pennsylvania has been here at least once before.

In 2007, gun rights activists sparked a public outcry when they hung a banner in the state Capitol rotunda, calling for Democratic state Rep. Angel Cruz to be hanged because he backed a bill requiring people to register their weapons and pay a $10 fee to the state police, the Inquirer reported at the time.

The banner argued that Cruz deserved to be “hung from the tree of liberty for his acts of treason against the Constitution.” It was a nod to a quotation, attributed to President Thomas Jefferson, asserting that “the tree of liberty must be refreshed from time to time with the blood and liberty of patriots and tyrants.”

It’s evocative of the same kind of rhetoric embraced by Pennsylvania Republican gubernatorial nominee Doug Mastriano, a former Army colonel and state senator from the state’s deep red underbelly who has fused the Big Lie with a potent dose of Christian nationalism.

Mastriano also has come under fire for his ties to Gab, and its founder Andrew Torba, who has endorsed his candidacy. Mastriano paid the site for political advertising, according to City & State Pa. Democratic governor nominee Josh Shapiro, who is Jewish and has been the target of anti-Semitic attacks on the site, has launched ads hammering Mastriano for his ties to the site.

That alternative media ecosystem “[leverages] people away from the broad range of trustworthy sources,” often at a tremendous profit, University of Pittsburgh historian Lara Putnam argued. And pols such as Mastriano have taken Trump’s mastery of grievance and social media and brought it to the next level.

“Getting people’s trust is really powerful in terms of dollars and cents, and in the eyeballs gathered,” Putnam said. “That’s a situation that is much more dangerous than Donald Trump. He demonstrated how effective it could be … and now lots of other people are following the same playbook.”

It’s no longer time to ask whether we’re in a new age of political violence. The only questions worth asking now are when it will flare beyond control, and the extent to which politicians and non-government actors from Pennsylvania will fan the fires of insurrection.

The embers already are smoldering.