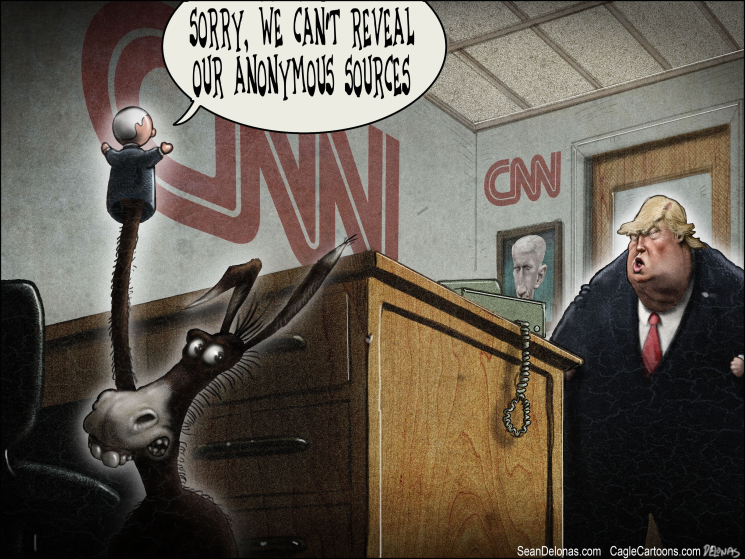 The stories of chaos, craziness and betrayal going on inside the Trump White House are nothing to worry much about.

White House staffers attempting to influence, question or thwart a president’s ideas or goals are as old as George Washington, Richard Nixon ,’ or Ronald Reagan.

It doesn’t matter how dubious the journalism is, or who writes it. If it’s anti-Trump, it’s always fit to print.

But the New York Times hit a new low in its war on Trump last week.

It published an anonymous op-ed piece written by a Trump adviser who claimed that he and some of his fellow White House “resistance” members were so concerned with the president’s actions and mental state that they contemplated using the 25th Amendment to remove him.

After my father was shot in 1981, some of his top advisers were seriously worried about his mental stability.

According to Bill O’Reilly in “Killing Reagan,” they considered using the 25th Amendment to remove him on grounds of mental incapacity and even gave him a test.

My father passed the test with flying colors and, according to the history books, did his job pretty well afterwards.

No one read about those concerns my father’s advisers had about his mental state in a New York Times op-ed piece as they were occurring.

Likewise, no one read about how he trumped his top advisers on his decision to invade Grenada.

When he called a White House meeting to vote on the idea, the final tally was 7-3 to not invade. My father was one of the three.

When one of his shocked advisers called and said, “Mr. President, I thought we had a vote and we decided not to go,” my father said, ‘Yes. we did. But my vote cancelled your seven.”

No one at the time read about that “fight” with his White House staff in the papers, just as they never learned how his advisers tried to prevent him from speaking two of his most famous lines.

They kept deleting “Mr. Gorbachev, tear down that wall” from his Berlin Wall speech and they also tried to stop him from referring to the Soviet Union as “the Evil Empire.”

The most important “fight” my father had with his advisers came in 1986, however, when he met with Mikhail Gorbachev at the nuclear missile summit in Reykjavik.

Everyone in the liberal media desperately wanted him to sign a nuclear arms treaty with the USSR — any treaty.

My father’s staffers were worried about his political legacy. Preferring a weak deal to no deal at all, they urged him to sign a treaty he did not think was good enough.

My father shocked his advisers, the media and most everyone in the Free World by saying “nyet” to Gorby in Iceland and walking out of the summit without signing anything.

Everyone in the liberal media thought he was nuts, of course. But his decision turned out to be a great geopolitical move that became a key turning point in the Cold War.

If the Washington Post had published an anonymous op-ed from one of my father’s worried advisers at the time, I bet history would not have turned out so well.

by Michael Reagan
I never thought I'd feel sorry for a billionaire - a $60 billion billionaire. But watching Mike Bloomberg getting beat up in the Democrat debate in Vegas Wednesday night was almost tragic. It was like watching a old boxer who gets clocked ear... ...