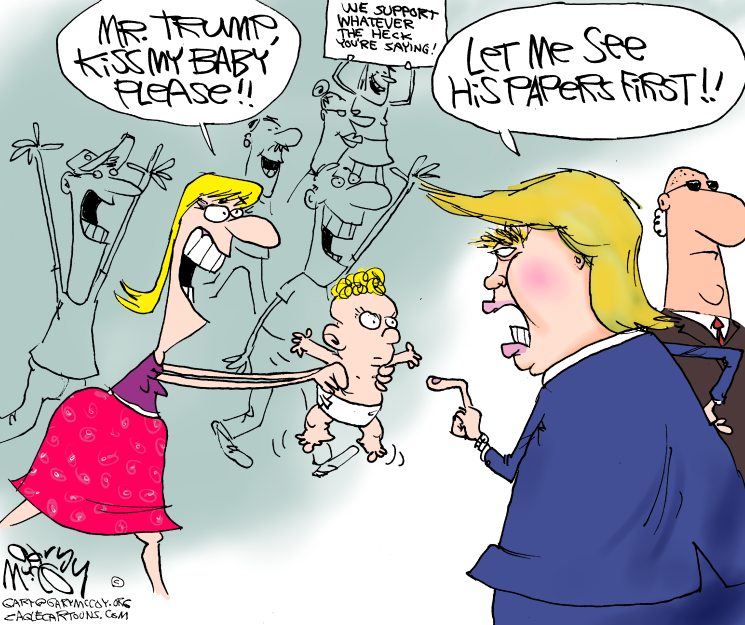 Ending birthright citizenship, better known as dropping the anchor baby, is the most significant illegal immigration reform the President Trump has announced. With a single executive order, he unplugs a beacon that attracts scammers from the world over. He also attacks a visible manifestation of the “foreigners first” mindset that has infected the State Department, and the rest of the federal bureaucracy, since the 1960s.

For those late to the discussion, birthright citizenship is the GPS theory of national allegiance. If your pregnant wife was sitting in the stands at Lambeau Field and she got so excited she gave birth, the resulting baby would not be entitled to season tickets for the rest of his life. But if your wife, Consuela, was an illegal alien in a sanctuary city, who gave birth in a sanctuary maternity ward, your new child would be a Yankee Doodle Dandy. An instant U.S. citizen with all the welfare rights that come with the birth certificate.

Trump will end that.

As is customary in these situations, the left and its propaganda arm the Opposition Media instantly sprang to the defense of this devaluing of US citizenship. Even worse, the OpMedia had no trouble recruiting reflexive anti-Trumpers like Paul Ryan (R,’INO). Ryan evidently liberated by his banishment to private life, stabbed Trump in the back using his favorite tactic of preemptive surrender. He claims anchor babies aweigh will require an amendment to the Constitution.

The left’s defense of birthright citizenship relies much on sentiment and sad stories and is light on facts. The talking points read like Shotgun Joe Biden wrote the memo. Here are the main defenses of this nonsensical geography theory of national obligation:

The plain language of the 14th Amendment guarantees birthright citizenship.

Birthright citizenship has been a part of the U.S. since the beginning.

The Supreme Court has ruled illegals are entitled to birthright citizenship.

The Supreme Court has never addressed the question of birthright citizenship for illegals. The case defenders cite, Wong Kim Ark, concerned two Chinese diplomats who were in the country legally and had a child. In their wisdom, the judges used subjectship under English common law, which the Founders had specifically rejected in the Declaration of Independence, to arrive at a decision that would be overturned today. The case said nothing about aliens in the country illegally.

Mark Levin said, “Not until the 1960’s [was] the Constitution … interpreted to convey birthright citizenship on the children of illegal aliens. And not due to any congressional statute or court ruling, but decisions by various departments and agencies of the federal bureaucracy.”

The federal bureaucracy is controlled by Trump, intermittently at least, so he can tell the executive branch to close the border maternity ward. An amendment isn’t necessary.

Trump should make the order retroactive to the first day of the administration. Certainly, the left will file a lawsuit and fall into a trap of their own making. This is the defining case that can overturn Wong and restore the original intent to the 14th Amendment and not the Hallmark Card legal philosophy that the government has followed for over 50 years. That’s a victory that will last long after the Trump administration.

Finally, Paul Ryan’s back-stabbing response when asked about Trump’s most important policy reinforces my advice to conservatives. Go on strike when you vote in congressional races. Conservatives should vote for every Republican candidate except Representatives. On that line write “On Strike.” Without the conservative base, always taken for granted, Republicans can’t win. In 2020, after the country club conservatives who survive have learned their lesson, resume voting as normal.

Conservatives will never see change in Congress until they change who’s in Congress. Going on strike is the place to start.

by Michael Shannon
Three years into the Trump administration seemed like a good time to evaluate progress on the number one issue for Trump voters: Illegal immigration. Unfortunately, progress is nil. There is no wall and no one is paying for it. There is no "depo ...
Another Democrat ‘Bombshell’ Bombs

by Michael Reagan
You're excused if you didn't hear about the latest impeachment "bombshell" that exploded in the media on Wednesday. Wednesday, after all, was a really crowded big-news day. It was the super-duper historic day when Speaker Nancy Pelosi's House... ...