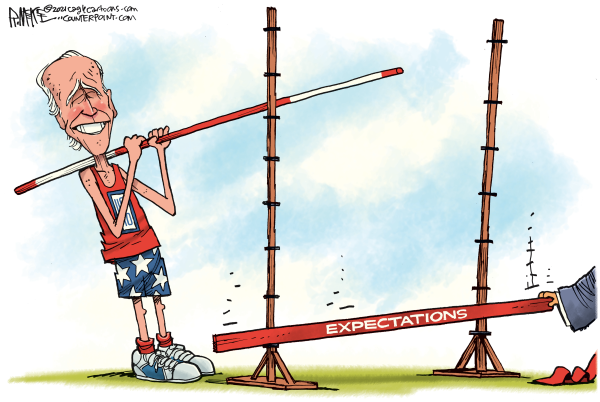 Everyone agreed the inauguration ceremony was nice.

Nothing plagiarized. Nothing too fancy. Nothing that presidential historians will be quoting a month from now.

Biden's call for national unity and political healing was widely praised by Democrats, the mainstream Democrat media and even some easily impressed Republicans.

But what did our new unifier-in-chief do as soon as he got control of the presidential pen?

Keeping his campaign promises, the born-again progressive kicked off his plan to reverse President Trump's "America First" direction and turn back the country to Obama-style open-borders and an economic policy that benefits Communist China and globalists.

Biden signed 17 executive orders on Wednesday and another 10 on Thursday. If they're not reversed by Congress or the courts, they are sure to hurt America and its people.

They will kill thousands of energy jobs in the Heartland, reopen our borders to waves of illegal immigrants and again subject us to the rules of the incompetent and corrupt World Health Organization and harmful international agreements like the Paris Climate Accord.

By his edicts on Wednesday, Biden immediately showed that when it comes to fostering national unity and building American back better, he's all talk and no walk.

Biden Logic is, to put it mildly, more like Biden Madness.

With a caravan of 10,000 Nicaraguan and Guatemalan migrants already on its way to the Texas border, he halted the building of the wall.

With the COVID-19 pandemic still raging in the United States, he's ready to greet thousands of illegal - and un-vaccinated- immigrants at our border with open arms and hugs.

And out here in California, where 3 million of the country's 12-plus million illegal immigrants already live, our streets are certain to be made more dangerous because of his decision not to deport illegal aliens - including criminal ones- for 100 days.

So thanks, President Joe. Way to put the good of the country above partisan politics.

In just two days you pleased both your leftist supporters who hate ICE and your party's environmental wacko wing.

It doesn't matter, I guess, that in the long run your new rules will shred our improved immigration system and endanger America's energy independence.

Or that they will hurt Canada's energy-based economy and help our competitors in the global oil and gas industry.

Good thinking, President Joe. You made 75 million Americans mad at you, but the liberal media are united.

They're loving every one of your executive decisions. CNN is so happy they can't stop slobbering over you and First Lady Jill.

In fact, they praised "Doctor" Jill for bringing class back to the White House after an absence of four years.

It's fine to praise Jill Biden. But what did Melania Trump do to deserve that last-minute cheap shot?

She only speaks five languages, came to America with nothing and ended up living in the White House.

In a fair and decent world, that's the definition of the American Dream.

But for the last four years the biased and nasty liberal media - from CNN to the editors of the New York Times and Vogue - were incapable of praising her even for her looks.

They hated on her or ignored her every day for one obvious reason: she married the wrong man.

For the next four years, with Biden or Kamala Harris in charge and the country divided 50-50, the media and their journalists are going to have a really tough time hiding their partisan biases and dishonesty.

When a Covid-20 virus comes over from China, or when the Biden administration throws the economy into a ditch, gets caught in bed with China or drags us into a war in Syria, who is the media going to blame?

With Donald Trump out of power and living in Florida, it's going to have to be the Russians.

Copyright 2021 Michael Reagan. Michael Reagan is the son of President Ronald Reagan, a political consultant, and the author of "Lessons My Father Taught Me: The Strength, Integrity, and Faith of Ronald Reagan." He is the founder of the email service reagan.com and president of The Reagan Legacy Foundation. Visit his websites at www.reagan.com and www.michaelereagan.com. Send comments to [email protected] Follow @reaganworld on Twitter.

A Game to Remember and An Even Better Story

by Rich Manieri
The basketball game ended. Then, something happened that I haven't seen. Every member of the winning team stood and cheered the players they had just defeated; six members of the Asbury University women's basketball team. There were only six Asb ...
Three Cheers for Texas

by Michael Reagan
He wasn't the first governor in the country to lift the mask mandate for his state. North Dakota, Montana and Iowa have ended state-wide mask orders in recent weeks and progressive states like Florida and South Dakota never issued them in the fi ...
Functionally Illiterate About Our Own Democracy

by Dick Polman
We know - or think we know - why so many home-grown goons stormed the U.S. Capitol. Most notably, a defeated cult leader pumped his Kool-Aid down their throats. But that's not the whole story. Trump was able to gin them up because they were so d ...