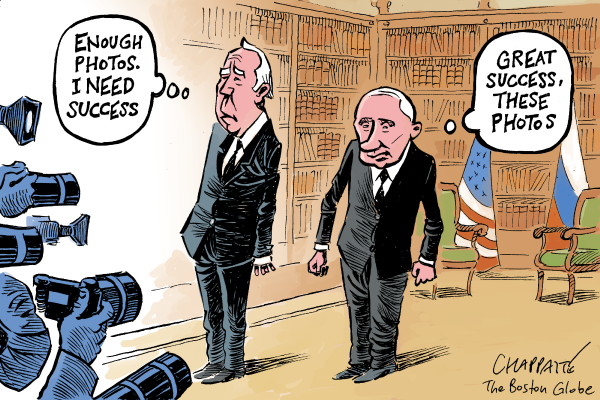 I think I can still hear them partying in the Kremlin.

Vladimir Putin and his inner circle are toasting each other with shots of vodka and loud singing.

I can’t understand Russian, but I recognize the tune - “Happy Days Are Here Again.”

After the thrashing Putin gave to President Joe Biden at their “summit” meeting in Switzerland this week, the devilish former KGB operative has every reason to celebrate.

Someone asked me on a scale of 1 to 10 what score I’d give to Biden for his G7 meeting in Britain and his one-on-one meeting with Putin in Geneva.

I gave Biden a five for just showing up in Europe. Then I started subtracting - all the way down to zero, because that’s what the U.S. got from Biden's trip.

The G7 leaders were a joke.

All they did, besides welcome Joe into their club of declining countries, was issue a weak communique after three days of posing for group photos on a beach in a posh holiday spot on the Cornish seacoast.

Biden supposedly wanted the G7 to join him and be tough on China for its human rights abuses, its takeover of Hong Kong and its non-market economic policies and practices.

But the leaders of the world’s most advanced countries - who are deep in the economic pocket of China - chickened out.

Instead of ripping into China for unleashing a virus that killed 3.5 million people around the world, they meekly urged its Communist rulers to be more transparent and show more respect for human rights.

The G7, which was more interested in showing how progressive it is, pledged to vaccinate poorer countries, create a global tax for corporations and spend many billions to fight climate change.

The G7 was a useless three-day publicity stunt for mediocre prime ministers and presidents, but Biden’s meeting with Putin in Geneva was the diplomatic disaster it was predicted to be.

Russia and Putin got everything they wanted - and paid nothing for it. Plus, they got it all before Biden even left the ground in Washington.

What did Biden get from Putin - whose military is closing in on Ukraine and playing war games off the coast of Hawaii?

President Biden let Putin off the hook about Ukraine.

Okaying the natural gas pipeline to Germany has already given Russia enormous economic and political leverage over the European Union.

(Unlike Biden, Putin knows that in 2021 whoever has the oil and gas still calls the shots - and no one is going to take away that geopolitical weapon with windmills and Parisian climate treaties.)

For good measure, Biden - trying to get tough? - gave Putin a list of 16 places in America that are off limits to cyberattacks by Russians in or out of the government.

Hello? Does that mean everything else is OK to attack, Putin might ask? To his credit, Biden didn’t send Putin the 16 URLs.

After the so-called summit, Biden made things worse by letting Putin hold a press conference by himself where he trashed America - and no one could challenge him.

Then, as Biden was leaving his own solo press conference, he got mad at a CNN reporter who had the nerve to ask him why he was so confident that “killer” Putin would change his behavior and turn into the Russian equivalent of Old Joe Biden.

Will someone please tell me what good came out of Biden’s un-summit for America?

Apparently, our president doesn’t know that when you go into a negotiation with a foreign adversary you don’t give them everything they want beforehand.

When my father was negotiating with the Soviets in the 1980s, someone asked him to sum up his strategy on the Cold War. He answered, “We win, they lose.”

If President Biden had been asked the same question before meeting Putin this week, he should have answered “They win, we lose.”

Because that’s exactly the message he conveyed.