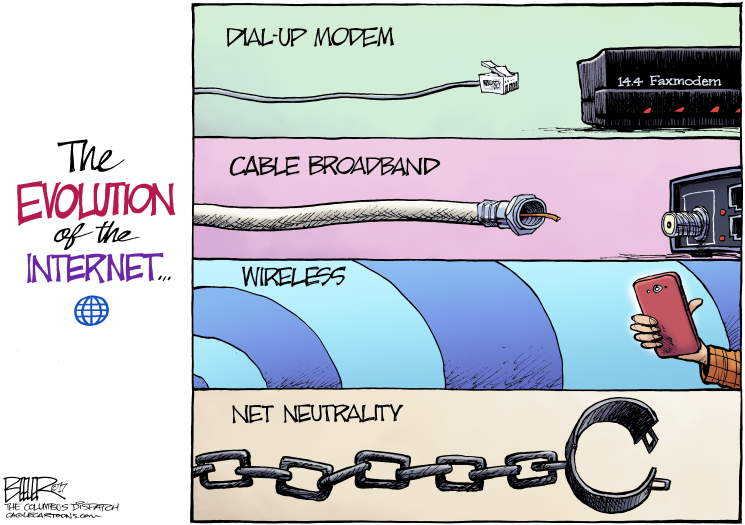 The 2015 Obama FCC order reducing the Internet to a regulated public utility under Title II of the 1934 Communications Act was marketed as protecting net neutrality – even though the DC Circuit Court of Appeals expressly held that any ISP that blocked or filtered web traffic would be completely exempt from the rules.The apocalyptic claims from the left that the repeal of Title II – which took effect on June 11 – would herald the end of net neutrality and the destruction of the Internet are therefore obviously absurd hyperbole.Especially considering that we have simply returned to the same regulatory framework that applied while the Internet grew and thrived for decades until 2015.

So what are the real stakes as Congress considers a partisan Democratic effort to re-impose the Obama public utility order?Taxes and fees.A lot of them. Internet services are protected by federal law from state, local, and federal taxes, but the Title II order reclassified broadband Internet as a phone service which enjoys no such protection. And there is overwhelming evidence that Democrats were waiting until Hillary Clinton won the election (oops) to spring the Title II tax trap.

Current FCC Chairman Ajit Pai explained it in testimony to the Senate back in 2016, when he was a dissenting member of a Democrat-controlled FCC.

“The FCC has already decided to boost E-Rate spending by $1.5 billion per year (conveniently, right after the November 2014 elections),” Pai said. “And it will soon dramatically expand the Lifeline program to subsidize broadband.”

“The money to fund this spending spree will come from a broadband tax.The only question is when,” he continued. “One might reasonably suspect that this decision is conveniently being put off until after the November elections.After all, making people pay more to access the Internet isn’t going to be popular.”

How much would Democratic broadband taxes cost if Title II were restored and a future Democratic FCC moved forward with this plan?

The current universal service fund assessment – which only applies to phone bills – sits at 18.4 percent.It would start as somewhat less than that if the assessment were spread over broadband bills, but over time it would creep up as demands for spending increased – perhaps sharply as public utility regulation would depress private investment, increasing pressure for taxpayer dollars to pick up the slack.

And that’s just the federal component.As a legal matter, the Title II reclassification could also trigger major increases in taxes and fees for cash hungry state and local governments too.The center-left think tank Progressive Policy Institute estimated that reimposing the Obama order would hit wired Internet users with an average annual state and local charge of $67 and wireless users with $72 – and of course most people have both home and wireless Internet, so they would pay both.

Republicans, led by South Dakota Senator John Thune and Oregon Congressman Greg Walden, have offered Democrats what they claim to want in the net neutrality debate – a permanent, legislative solution that prohibits blocking and throttling of Internet traffic.

But their legislation would also prohibit public utility regulation – and the massive taxes and fees that Democrats appear to really be after.Every Senate Democrat has voted to reimpose the Obama order and House Democrats are overwhelmingly lining up to follow suit.

Voters should keep in mind what this is really about if they don’t want to wake up one day to a bunch of expensive new Democratic Internet taxes.And Republican members of Congress who might be tempted to cave to the dishonest net neutrality noise machine should be more worried about what constituents will think when they see how much it ends up costing them.