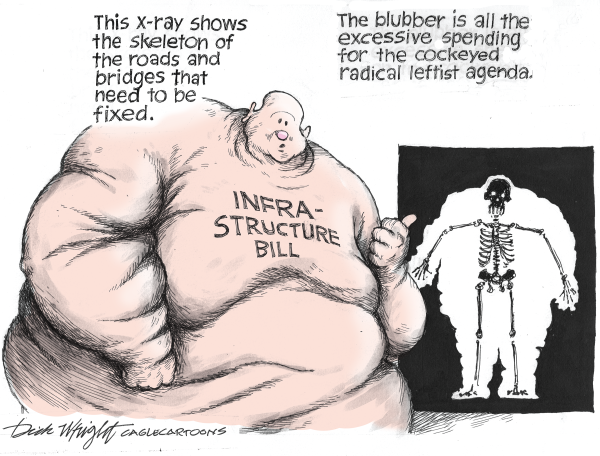 Broadband has been America's greatest infrastructure success story – modern, reliable, and passed the stress-test of soaring demand from COVID lockdown with flying colors.

It's success stands in stark contrast to government-run infrastructure - water, sewer, transportation - which in many places is in a state of disrepair. It also stands in contrast to broadband in Europe, where regulators opted for government-managed pseudo-competition, as networks struggled and strained and had to be throttled when demand surged.

As the University of Pennsylvania's Christopher Yoo reported: "Between 2010 and 2016, American providers invested on average annually 2.35 times as much per household as their European counterparts. This allowed the average U.S. household to consume more than three times as much data as the average European household in 2017, according to Cisco. This is a significant jump over the 44% difference between U.S. and Europe that existed a decade ago."

Even Obama's FCC chief Tom Wheeler admitted at the height of lockdown: "Credit is due to the nation's broadband providers. The fact we can work from home is the result of hundreds of billions of investment dollars and construction and operational skill."

A sensible infrastructure policy would look to broadband as a model to bring more private management and investment into other types of infrastructure. The Biden administration is doing precisely the opposite - massively funding a government takeover of broadband.

The justification for government-run broadband keeps changing. As recently as 2010, Obama National Economic Council member Susan Crawford warned "consumers will have just one provider to choose from: their local cable monopoly." Wireless couldn't compete. Telco Internet – with the exception of Version FIOS – didn't count as broadband. "This is the central crisis of our communications era," she wrote.

So now, just one Democratic administration later, the primary justification for government-run networks is that private networks are great at downloading, but don't upload fast enough. Really?

The U.S. Treasury is proposing a redefinition of broadband to symmetrical 100 megabit upload and download speeds that would instantly make 58 percent of all households unserved — surprise, even your gigabit cable Internet isn't broadband anymore!

The idea is absurd on the merits. Broadband consumers in 2019 used 14 times more downstream than upstream. Asymmetrical networks were deployed not just for technical reasons, but to serve actual usage patterns. Zoom's posted technical requirements only call for 0.6 to 3.8 Mbps of upstream capacity. While video conferencing increased due to COVID, this asymmetrical usage barely budged.

Meanwhile, we have more evidence than ever that government-owned networks are boondoggles. A recent report from Citizens Against Government Waste found:

"From Bristol, Virginia to Provo, Utah, GON projects have proven to be costly, unsustainable, and anti-competitive, while they divert taxpayer resources from higher priorities and fail to solve connectivity issues… Proposals by members of Congress and the Biden administration to preclude private sector participation in up to $100 billion in broadband funding will stifle innovation and cripple investment in new technology."

The Obama stimulus spent $7.2 billion on broadband – and almost all of it ended up going to well-populated areas (more votes there) that were already served. Even with the advantage of free tax dollars, these systems were, the report found, "ineffective or failed, loans became delinquent, and borrowers defaulted. The NTIA project completion rate was abysmal."

Now states are sitting on $350 billion of so-called COVID relief funding. They will be tempted to again spend it in on government-owned networks in vote-rich areas rather than reaching sparsely populated areas without broadband, or figuring out why some low-income consumers don't subscribe to even cut-rate or free Internet plans. And Congress looks poised to add yet another pot of broadband money in the pending infrastructure bill.

All of this gets infrastructure exactly backwards. Congress should repeal the restrictions on the $350 billion they have already sent states that ban it from being used for roads and bridges, and target broadband spending narrowly to the few remaining truly unserved.