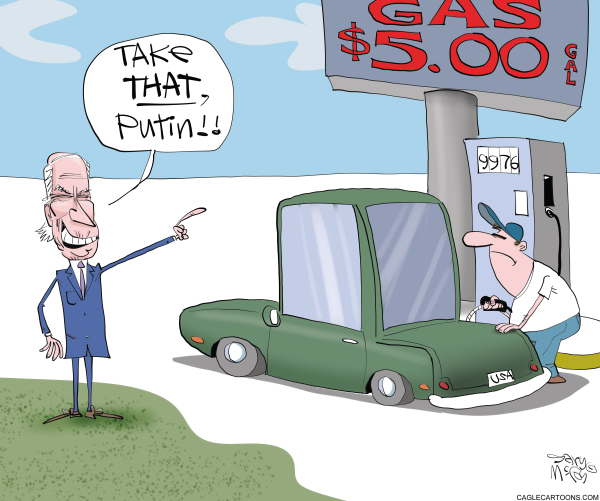 Energy prices are up 32 percent in the past year, causing pain at the pump, paying monthly utility bills, and buying everything that's grown, shipped, or manufactured. And yet, staring at this painful reality, many of America's largest corporations are elevating green wokeness over economic and business logic by calling – in the midst of record high energy prices – for new taxes on energy.

The major oil and gas producers themselves have been shopping a "tax our customers, please" slide deck around town in Washington, DC. According to the Wall Street Journal, "The nation’s biggest oil industry trade group has drafted a proposal urging Congress to adopt a carbon tax, which would put a surcharge on gasoline and other fossil fuels to discourage greenhouse-gas emissions. The draft proposal was approved by the American Petroleum Institute’s climate committee last month."

The assumption here is that becoming tax collectors for Washington politicians will somehow cause them to loosen their regulatory grip. There is a certain perverse logic here, perhaps modeled on the tobacco industry, which secured its long-term future by becoming one of the major revenue sources for state governments. But it unmistakably means higher costs for customers and more economic pain.

It's not just the oil and gas industry. The Business Roundtable, a group of corporate CEOs from across ever sector of the economy, published a "roadmap for U.S. energy policy," ostensibly to lower prices. But plank number six of their plan is to "establish a price on carbon," that is, impose an energy tax on fossil fuels. It is absolutely insane to call for higher taxes on energy in a plan to lower energy prices.

"At a time when skyrocketing inflation is hammering American families, it is shocking and tone-deaf that The Business Roundtable’s latest energy policy proposal calls for a new energy tax that would increase energy costs… We strongly oppose the BRT’s proposed energy tax that will hit lower-income families, small businesses, and those on fixed incomes the hardest while doing nothing to confront China, the world’s largest emitter of carbon… Advocating for an energy tax while soliciting massive government handouts for special interests is destructive, ineffective, and unaffordable."

That is a near-unanimous sentiment among House Republicans, but unfortunately Senate Republicans may be more susceptible to industry-lobbying for higher energy taxes. Several are in a bipartisan working group that appears to coalescing around on a plan to impose carbon taxes only on imports, seizing on the Trump-era GOP's friendliness toward tariffs.

Bloomberg reported the plan "would place tariffs on fossil fuels and products such as cement and steel to prod countries that are moving too slowly to cut their greenhouse gas emissions."

Such a tax would directly raise costs for Americans on top of the budget-busting prices they are already experiencing – and it would likely spur other countries to retaliate, eventually leading to global carbon taxation. It should be a nonstarter.

Voters should demand candidates for office this year take crystal clear positions on new energy taxes, rejecting them in favor of real solutions. America needs a Congress that will scuttle the Biden administration's anti-energy regulatory agenda, find a way to reverse the de facto Wall Street ban on investing in new fossil fuel production, and greenlight stalled pipeline projects all over the country.

It is ridiculous that this needs to be said, but this is no time to impose higher energy taxes.