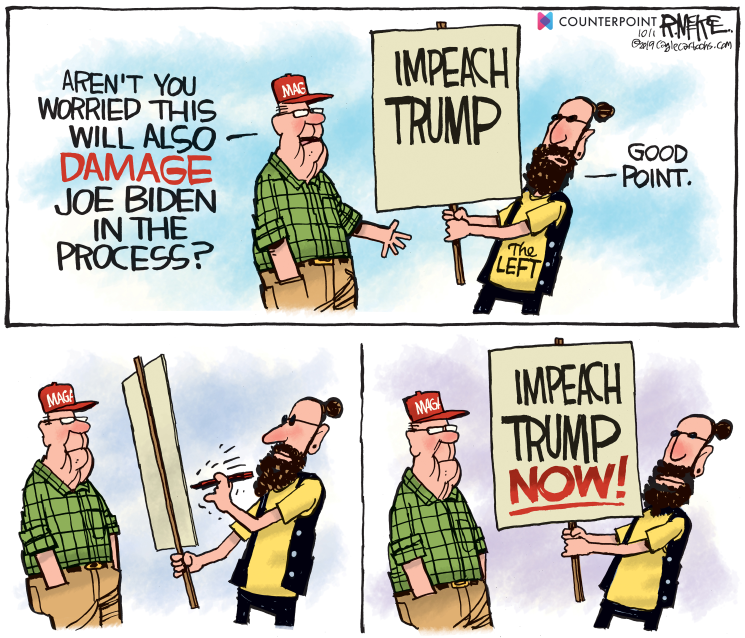 Schiff’s dramatic reading of President Donald Trump’s phone call to the president of Ukraine was a tour de force by the California Democrat.

The performance had a little bit of everything. Sure, it was mostly made up, but what actor doesn’t take a bit of creative license?

“No other country has done as much as we have. But you know what, I don’t see much reciprocity here. You know what I mean? I hear what you want. I have a favor I want from you though. And I’m going to say this only seven times, so you better listen good. I want you to make up dirt on my political opponent, understand? Lots of dirt, on this and on that. I’m going to put you in touch with people, and not just any people. I’m going to put you in touch with the Attorney General of the United States – my Attorney General, Bill Barr – he’s got the whole weight of American law enforcement behind him.”

Fantastic! It’s a bit of Don Corleone with a hint of Tony Soprano. And it would be truly scandalous for a U.S. president to say such things, if he did.

Schiff’s soliloquy drew rave reviews from Democrats. The president, however, is a tough critic when it comes to parodies of himself. Ask Alec Baldwin. Trump gave Schiff’s performance half a star.

“Rep. Adam Schiff illegally made up a FAKE & terrible statement, pretended it to be mine as the most important part of my call to the Ukrainian President, and read it aloud to Congress and the American people,” Trump tweeted. “It bore NO relationship to what I said on the call. Arrest for Treason?”

The last part might be a bit much, but as long as they’re throwing around the “T” word in Washington, why not?

Oh, sorry. That wasn’t Schiff. That was John Wayne in “Big Jake.”

“Now you listen to me, and you listen good. I don’t give a damn which way you go, just don’t follow me. You got that?”

Wait. My bad. That wasn’t Schiff either. It was Copeland to Dr. Kimble in “The Fugitive.”

He must watch a lot of movies.

It’s so difficult to separate truth from fiction these days, maybe because no one, including our elected representatives, seems very interested in separating them.

But it makes for good theater and that’s all that matters.

If there’s one early casualty ,’ and there will be others ,’ in the current impeachment drama, it’s truth.

It’s difficult to take Democrats seriously after they’ve been doing everything possible for three years to delegitimize Trump’s election. They want him out and that’s it. Collusion wouldn’t do it so the phone call in question will have to suffice.

However, Schiff’s re-creation of the phone call is an outrageous and deliberately misleading piece of fiction. And the scrap on which Democrats are pouncing, “I would like you to do us a favor,” Trump is talking about getting to the bottom of the cyberattack by the Russian government. The favor is not digging up “lots of dirt” on his opponent, as Schiff alleges. That’s clear in the transcript.

The bigger problem is that Schiff and his Democratic colleagues in the House have already determined Trump is guilty of something. Schiff is going to wallpaper Washington D.C. with subpoenas for information, not to find the truth but to confirm what he wants to believe.

“There is a great deal more we need to know to understand the full depth of the president’s misconduct,” Schiff said Wednesday.

There you have it. Forget the investigation. We should probably just fast-forward to the trial.

Truth is, indeed, stranger than fiction.

If we could only tell the difference.

If Only We Would Tame Our Tongues

by Rich Manieri
I stopped long ago reading comments under news articles and opinion pieces. Not because I don't believe readers should have the opportunity to comment, but mostly because nothing about what is posted is helpful or constructive. In fact, much of ...
Which Songs Make You Cry?

by Danny Tyree
"Late at night when it's hard to rest/I hold your picture to my chest/ and I feel fine, I feel fine/But it's a rainy night in Georgia... " - written by Tony Joe White and performed by Brook Benton. I need your input. I know this is a terribly pe ...
Trump Is Dragging A Dead Woman Through The Mud

by Dick Polman
Timothy Klausutis, an innocent American who was despicably victimized on social media this month by Donald Trump, has written an extraordinary letter to the CEO of Twitter. This excerpt will bring you up to speed: "Nearly 19 years ago, my wife, ...