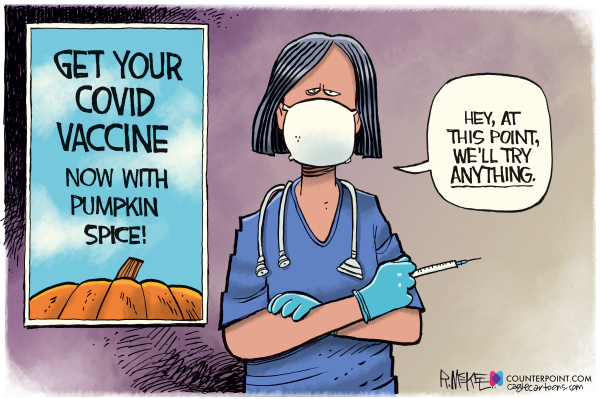 I happen to believe vaccines are a good idea. That’s why I got one.

Everyone in my family is fully vaccinated against COVID-19. Furthermore, a lot of what I hear as justification for not getting vaccinated is nothing more than kooky talk, based neither in fact nor reality – from the DNA manipulation conspiracy theory to microchip implantation paranoia.

By the way, if the government wants to shoot a chip into me so I can be tracked, go right ahead. You’re likely to be very disappointed by what my day-to-day routine reveals.

However, legitimate skepticism – and no, not all skepticism is fueled by whacky conspiracy theories – about vaccines is understandable, given the conflicting information we’ve received since the beginning of the pandemic. But anyone who dares express concern about the current policy is labeled a heretic.

I wrote a piece a few weeks ago in which I questioned the timing of booster vaccines which, as it turns out, was also questioned by infectious diseases experts and officials at the Food and Drug Administration, two of whom have since resigned. A reader emailed and insisted that by merely raising the issue, I will be responsible for future COVID deaths among the unvaccinated.

This sort of either-you-agree-with-me-or-you’re-a-murderer method of debate makes it a bit difficult to have a reasonable discussion. Worse, it only makes skeptics more skeptical. True, there’s a certain portion of the population that is so dug in at this point that nothing anyone says or any evidence presented will change hearts and minds. But there are others who are legitimately conflicted and confused, due in no small part to what our public servants, elected officials and media have been telling them.

In his mostly awful and strangely angry speech on vaccine mandates last week, President Biden said, “We’re going to protect vaccinated workers from unvaccinated co-workers.” He had just said that vaccinated Americans face no health risk from the virus. It’s this kind of muddled messaging that only gives more ammunition to the resistant. If I’m one of the 80 million unvaccinated Americans listening to the president, I’m less motivated to run out and get vaccinated than I was before he started talking.

A pandemic is a fluid situation. Most reasonable people understand that guidelines and recommendations can change based on updated information. But if the goal is really to motivate unvaccinated Americans to get a least one dose of a vaccine, portraying vaccine skeptics as potential killers or misguided morons is a curious strategy. And the media isn’t helping.

Last week, Rolling Stone ran with, and other left-leaning media outlets shared, a story about Oklahoma hospitals being overrun by patients who overdosed on ivermectin, a drug commonly used to treat parasites in animals and, in some cases, in humans, according to the FDA. The drug has also been advocated by vaccine skeptics as a COVID treatment. The problem with the story, which was originally reported by KFOR TV in Oklahoma, is it wasn’t true. The hospitals themselves refuted the report.

A story such as this only sees the light of day because it wasn’t properly vetted and worse, because those who reported and shared it were predisposed to assume it was – and wanted it to be – true.

Just this week, CNN host Don Lemon called unvaccinated people “stupid” and called on the vaccinated to “start shaming them.”

Americans generally distrust politicians and the media isn’t far behind. Again, if the goal is to get the unvaccinated to join the rest of us, bogus news stories, divisive rhetoric and “hot takes” from bloviating pundits aren’t going to cut it.

Human experience tells us that attempting to legislate behavior only makes the reluctant less likely to cooperate. If you doubt this, try telling your teenage daughter she should dump her boyfriend. You’ll be responsible for the most star-crossed love story since Edward the VIII first asked Wallis Simpson to join him for tea and scones.

About 74% of the U.S. population over 12 years of age has received at least one dose of COVID vaccine. Most experts agree that we need to get to around 80% to have some form of herd immunity.

If we’re going to get there anytime soon, more education and less scolding would be a good start. And we would do well to remember the “We’re all in this together” pandemic mantra that was popular once upon a time. It seems to me a much better approach than “Get on board or else.”