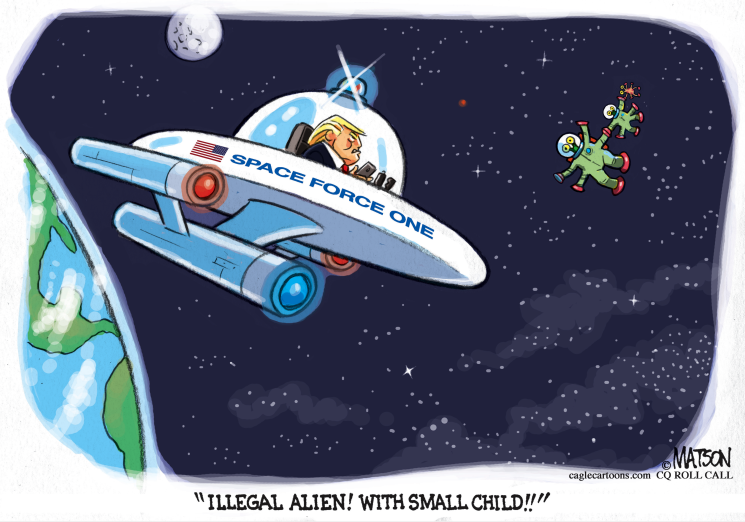 People keep wondering how the hell we got here. How did America become a country that forcibly separates kids from their parents? The answer is obvious: we got Trumped.

Since the election of the 45th POTUS, everything we know is wrong. Racism is good. Health care is bad. Coal is the future. Rich people need more money. North Korea is our friend. Canada and the free press are the enemy. Judges aren’t necessary, since we can tell who’s guilty just by looking at them.

The very phrase “President Donald Trump” should be surreal. Like saying Pope Charlie Sheen. It’s a Saturday Night Live skit. One of those not very funny SNL skits they slap on after the second appearance of the band.

The Golden Canopy drags us down to his level, and just when we think we’ve reached a new low, another sub-basement gets dug. In a year and a half we’ve sunk so low we can feel the heat on our feet from the core of the Earth.

Absurdity has become normalized. We’ve built up a tolerance to delusions. We’re constantly jonesing for another shot of narcissistic confusion. We’ve turned into adrenaline junkies demanding our larger daily dose of preposterousness.

On April 6th, Attorney General Jefferson Beauregard Sessions III announced the administration’s zero tolerance policy. He then used the Bible to justify its policy of separating immigrant parents from their children. Citing the same passage the south used to defend slavery. Maybe the plan was to rent the kids out to corporate farms. That cotton isn’t going to pick itself, you know.

Trump and other administration officials proceeded to hold a competition for the most ludicrous excuse with a veritable bevy of them. “The Democrats are responsible.” “We’re just upholding the law.” “Using kids as hostages is not our policy.” “The courts made us do it.” “Only Congress can undo it.” “Our hands are tied.” “The Torah says it’s okay.” “Obama did it first.” “The kids are drug mules.” “They’re tiny future rapists.” “Crooked Hillary is to blame.” “Mexico is to blame.” “Bill Clinton had an affair.” “911 was an inside job.” “Putin should be emperor of the world.” “What kids?”

The problem was the optics. Kids in cages may look good on paper, but it doesn’t play so well on TV. And the rest of the Republican Party has tied their future to him with knots that would earn a boy scout merit badges. These enablers have already revealed themselves to being anti-logic, anti-environment, anti-democracy and anti-fidelity. What difference does anti-family make?

Under pressure from his own party, especially from that select group of members up for election in November, the President signed an executive order to change the policy he claimed wasn’t a policy and couldn’t be changed.

Then to put the oddest of exclamation marks on the proceedings, the First Lady visited a detention center while wearing a $39 jacket that had the words “I don’t really care. Do U?” painted on the back. And the overwhelming response of seeing toddlers crying for absent parents was “Yessss.” At least she didn’t offer to bring the kids cake.