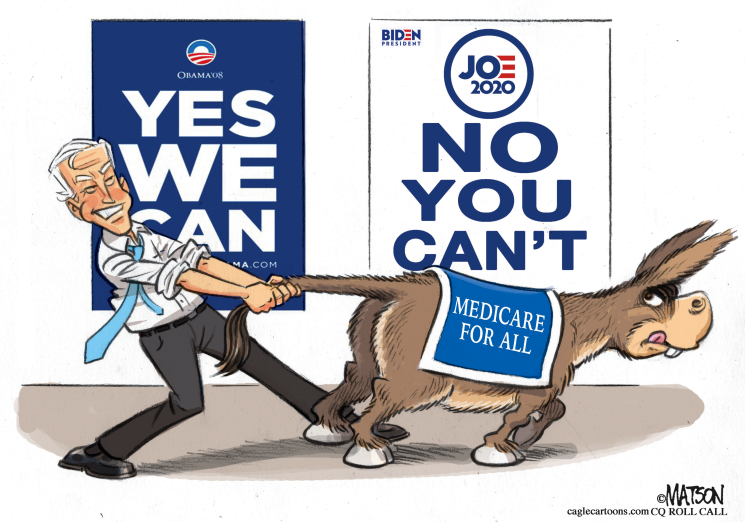 Got an embarrassing admission here. I was scheduled to summarize the Democratic candidates debate last week, but also had a deadline about the opening of the football season, and they kind of got mixed up together. Don't you hate it when two things vie for your attention at the same time? Must be what's making Donald Trump so irascible.

Of course, when you get right down to it, the two do have quite a bit in common. Both politics and football are sports that don't finish until there's blood on the field. You cannot comment on either one without your trusty basket of cliches. And the losers are forgotten as soon as the contest is over (if not before).

So apologies all around and here goes:

Joe Biden. This crafty veteran comes to play every day and always gives 110 percent, but you can't help but suspect some of those unforced errors early in the season are going to come back to haunt him.

Elizabeth Warren. Everyone knows she always brings her "A" game and is making plays on both sides of the ball, but now it's gut-check time and she needs to put the rock in the house.

Bernie Sanders. Not only does he believe that winning isn't everything, it's the only thing, but also, that louder is better. This old war-horse has been there before and knows what to do; the question is does he still have what it takes?

Beto O'Rourke. He comes to play every day, dealing with one debate at a time, proving to all the fans in the stands that he can play with the big boys. And girls. Or will he toss his long-shot personal ambition aside and take one for the team?

Andrew Yang. He matches up well with the Democratic message and talks a good game, but now its time to punch it in. The only worry is whether his giveaway strategy will help or hurt over the course of a grueling schedule.

Pete Buttigieg. His back is up against the wall with lousy field position and is looking at 4th and forever, so it might be Hail Mary Time.

Kamala Harris. The momentum may have shifted, but she has proven over a long career that she won't be denied, as we saw when she threw her game plan out the window to concentrate on running it right up the middle and is knocking on the door.

Amy Klobuchar. It's a game of field position and she's got some room to operate, but at the end of the day, it all comes down to who can score the most points and how bad she wants to run to daylight.

Cory Booker. You can't stop him, all you can hope to do is contain him. He doesn't know the meaning of the word "quit." Other words he's unfamiliar with are "victory," "triumph" and "harpsichord."

Julian Castro. With his back up against the wall, he left it all on the debate stage, never pulls his punches and demonstrated he believes the best offense is a good offense.

But let's hope none of them relax, because Tom Steyer has shaken off plenty of would-be-tacklers, isn't running out of money any time soon and appears to be en fuego. Its obvious the man came to play.

There’s No Cure For Covidiocy by Dick Polman
If only I had a magic wand, I would henceforth consign all conspiracy freaks and vaccine refuseniks (78 million in number) to some distant desert isle where they could breathe free upon each other until God sorts them out. I know that sounds har ...
Enemies Among Us by Joe Guzzardi
Only the most willfully obtuse on Capitol Hill would deny that the Biden administration’s neglect of wide-open borders might lead to a national security crisis. Estimates vary on how many foreign nationals from numerous countries have unlawful ...
How About a Newspaper Subscription for Christmas? by Danny Tyree
My access to news narrowed dramatically when I was 10 years old. My mother’s boss passed away, so I no longer got to peruse his morning paper. And, despite my protestations about prying the funnies from my cold, ink-stained fingers, family bu ...