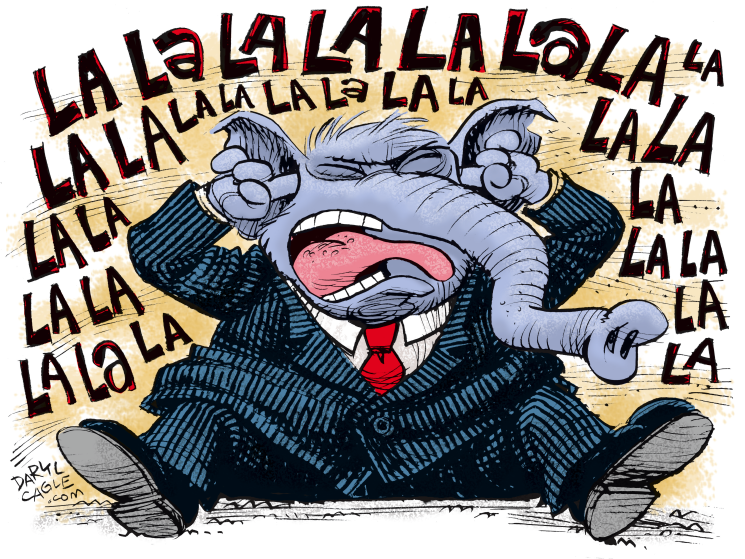 This White House breathes chaos. It's like one of those Vaudevillian plate spinners who isn't happy until all the plates come crashing down to the ground. The attraction consists of the cast kicking through the detritus, which is always loud and cacophonous.

But even given that standard, the current state of disarray is breathtaking. Staffers are quitting, subpoenas are being issued and terms like "treason" and "civil war" are being bandied about. This is more than your run of the mill ordinary pandemonium - this is super-exceptional pandemonium, like a monkey in a tuxedo juggling bayonets. On a unicycle. In hell.

This latest chapter in mayhem and bedlam occurred in the wake of a whistle blower coming forward to claim Donald Trump attempted to shake down a foreign leader to interfere on his behalf in the next election, which is so illegal, even Vladimir Putin was impressed.

Holding hostage an arms shipment that Congress had already approved, the president first asked a favor of Vlodomyr Zelensky, the Ukrainian president. Trump not-so-slyly intimated the arms would be released only if the Ukrainians were able to dig up some dirt with an investigation of Joe Biden's son, Hunter. And Elizabeth Warren, Bernie Sanders, Kamala Harris and anyone else they had dirt on. Marianne Williamson, not so much.

Trump also threatened to keep Vice President Mike Pence from making a state visit unless ball was played, which is a weird form of intimidation. Keeping Pence from coming to your country doesn't sound very menacing. More like a reward. As a matter of fact, next time the stable genius might want to promise Rudy Giuliani and William Barr would stay equally far away. Might provide more leverage.

Despite previous confusion, Secretary of State Mike Pompeo was listening in on the very phone call, records of which were diverted to a super secret server that stores other calls and documents that make the president look bad. So, it must be one hell of a server. Maybe a warehouse in Bethesda?

The president responded by saying the whistleblower was like a spy, and in the old days, they knew how to deal with spies. Isn't Trump suggesting we execute witnesses to his crimes an impeachable offense as well? He's stacking 'em up like 747s circling O'Hare after a surprise blizzard the day before Thanksgiving.

Trump doesn't deny the call with Zelensky and released a transcript maintaining that the conversation was "perfect and beautiful." And because we've gone through this process for 33 months, we all know how the rest is going to play out. He'll say even if he did it, many people are saying there was nothing wrong with it. There will be stonewalling. He'll say plenty of other people did the same thing, especially Obama.

He'll increasingly attack the accuser, threaten lawsuits and call the scandal just another partisan witch- hunt, which further exemplifies the larger conspiracy against he, the best president in the history of ever. And during all these predictable machinations, he'll continue to distract the public by offering up other tantalizing morsels for public and media consumption.

Maybe he'll finally release his tax returns or leak photos from the night he spent with Stormy Daniels or start a war. But we all know how it'll turn out. He'll blame Hillary. And then break more plates.