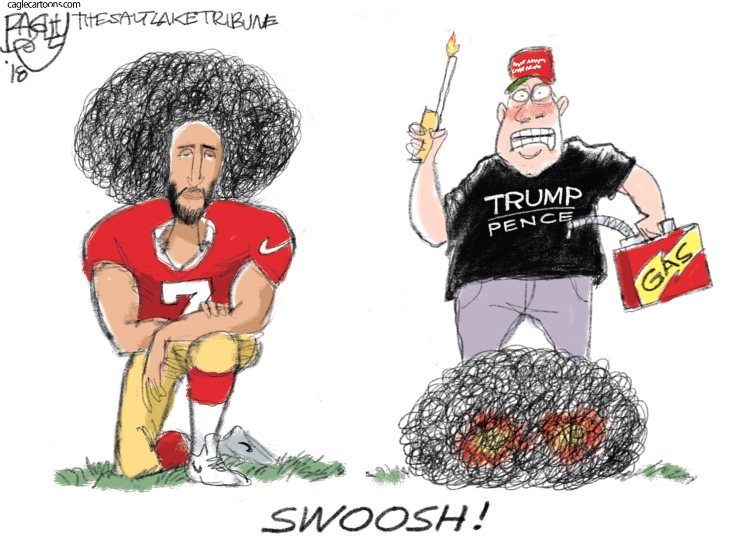 Failed NFL quarterback Colin Kaepernick continues to stay culturally relevant by depending on the kindness of strangers. If it weren’t for white folks, beginning with his foster parents, Kaepernick might just be another player who peaked early and disappeared.

The first white person who bailed him out was – of all people – President Donald Trump. Colin began his ‘take a knee, look at me’ protest with an example of bad timing that should have rendered him a joke from the beginning. He protested black “injustice” during Barack Obama’s second term.

Now I won’t deny there are still jerks who like nothing better than disparaging black folks while burning a cross in their backyard fire pit. Still, it’s a pretty ramshackle variety of “institutional racism and oppression” that lets a black guy slip through the net and become president.

Cognitive dissonance has never been a feature of the Opposition Media, so the contradictions of Kaepernick’s genuflection were ignored. Colin’s problem was the public was starting to ignore him.

Then Trump came to his rescue. The president’s flag protest tweets made him sole proprietor of the opposition to flag disrespect. Instantly, Kaepernick is relevant again.

Then comes the off season. David Hogg doesn’t play the national anthem at his anti-gun rallies, so no role for Kaepernick there. The same goes for the other America Last functions with which Colin is now allied. Trying playing the Star Spangled Banner at a Black Lives Matter rally and Kaepernick’s knee wouldn’t have time to hit the dais before the violence begins.

Colin needs football more than football needs him. His summer media mentions were boring updates regarding his lawsuit against the NFL for not being willing to pay millions to a self-absorbed customer alienator. Kaepernick was running the risk of sliding into the ‘Disgruntled Employee Sues Former Employer’ pigeonhole with Stormy Daniels.

Then the white folks at Nike came to the rescue.

Kaepernick is now the face of the ‘Just Do It’ campaign. Colin’s acceptance was a certainly. Nike’s making the offer is what’s curious. Decades of Nike marketing is based on an immature, high school rebellion philosophy.

Which means there’re plenty of other Americans who risked all to stand up for their beliefs, but I don’t think Nike will be featuring Masterpiece Cakeshop owner Jack Phillips or former Rowan County Clerk Kim Davis any time soon.

Nike prefers to put its corporate thumb in the eye of 63 percent of white America and 26 percent of black America that is opposed to insulting the flag. This could prove to be a bad financial bet, since I’m not sure how much money the Ultimate Frisbee demographic spends on sports equipment.

Insulting the flag is the short-term damage, but the decision has dangerous long-term implications. Nike has decided to put its corporate weight behind dividing the country in service of lies and propaganda that harm the black community it purports to be supporting. And the campaign has no terminus because It’s impossible to solve a problem that doesn’t exist.

Philippe Lemoine did an analysis of the Police-Public Contact Survey, a 70,000 sample of US residents. He found “just 16 unarmed black men, out of a population of more than 20 million, were killed by the police… These figures are likely close to the number of black men struck by lightning in a given year.”

The case for routine police harassment is equally fraudulent. Black men have less yearly contact with police than whites: 17.5 to 20.7 percent. And as for injury, protesters in the stadium have a greater chance of getting a rug burn at the hands of Monsanto than they do a bruise at the hands of the cops.

Patriots lit up social media with photos of burning Nike products. This seems self-defeating to me since it limits our wardrobe choices without damaging the corporation.

A better option is wealthy collegiate athletic donors informing athletic directors that if Nike isn’t dropped, then their donations to the program certainly will. This type of punishment may make a difference in the Beaverton boardroom. Individuals can save matches and stop buying future Nike products.

My son thinks it’s a big deal about a small affront because he likes Nike Rugby cleats. He’s wrong. The culture is in this situation today because people who love this country sat back in their comfortable chairs and let the insults accumulate.

It was only an ad, or a statement or a single policy. Time after time after time. The result of our indolence is mainstreaming Colin Kaepernick. It’s time to demonstrate that putting a thumb in the eye of middle America is not a cost-free exercise. If for no other reason than we’re running out of eyes.