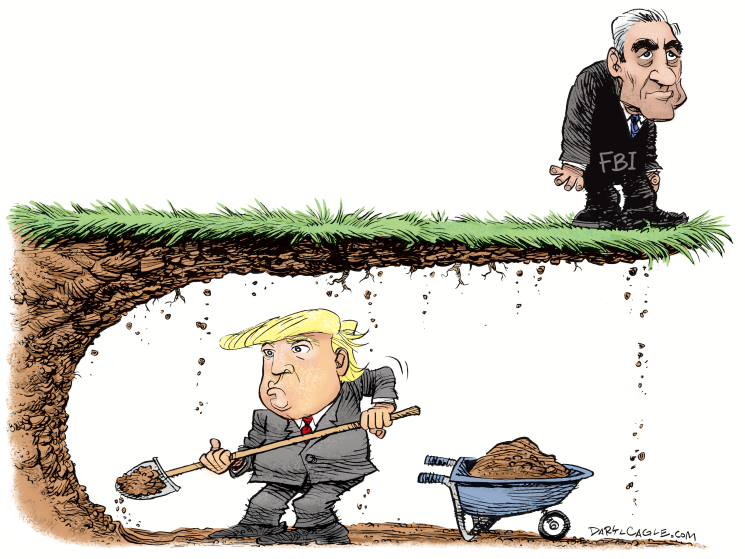 I frankly don’t know how President Trump gets anything accomplished in the White House. What with the noise created by dominoes falling and the screeching of walls closing in due to Ahab Mueller’s investigation, it must be impossible to hear yourself think.

On the plus side, the background din does make it that much harder for disgruntled employees to surreptitiously record the president’s conversations.

Stormy Daniels ragging on Trump during his campaign is just another estrogen attack, like Rosie O’Donnell or Megyn Kelly. Trump and female entertainers, with or without their clothes on, are a volatile mix.

Barron is a different story. Trump’s youngest son says he’s unhappy with the size of his allowance compared to that of other plutocrat progeny. In an interview with the school newspaper, Barron calls his father a skinflint and hints that he might not be a billionaire. Tiger Beat picks up the story and the next thing you know George Ramos is shouting questions.

It’s possible Trump isn’t as wealthy as he claims. That’s why the only way the public would get access to Trump’s tax returns is if Anderson Cooper pried the documents from his cold, dead hands. I think that’s also why Trump abandoned one of his early selling points and didn’t finance his own campaign.

If Barron had even intimated he thought dad had small hands and a smaller bank account it would have been headline news. Keeping that negative publicity squashed would have been invaluable to Trump’s campaign.

That’s why it’s time for Mueller to bait another hook. First, Ahab needs to learn if Barron’s allowance experienced a suspiciously large increase just after his father announced. Then, who handled the money? Did Trump distribute the payoff or did he use a cutout like Melania? Or a check drawn on a Russian bank?

Everyone knows how volatile kids can be. Did Trump have to ‘sweeten the pot’ as the campaign intensified to ensure continued silence?

You may be skeptical. Thinking even the insane clown posse that constitutes the U.S. left would hesitate to weaponize an allowance, but you’d be wrong.

Look at the “campaign law violations” to which Cohen pled guilty. In this instance Mueller manufactured his own whale and claimed a catch. The twisted logic behind the “violation” is twofold. Cohen made an illegal campaign contribution when he paid Stormy Daniels using his own money, then Trump reimbursed him. And two, the expenditure was not accurately reported on the campaign reports filed with the FEC.

Let’s take these fantasies one at a time. Trump is allowed to spend unlimited amounts of his money on his campaign. If Cohen is guilty of a contribution violation because he paid a whore for not performing, then EVERY campaign vendor from ad agencies, to printers, to pollsters are also guilty of campaign contribution violations if they bought media, printed literature or surveyed voters before being paid by the campaign.

By this illogic, any vendor who has an outstanding invoice- woe unto you if it’s the Clinton campaign – is also guilty of an expenditure violation or an unreported loan.

Which brings us to the other violation. There’s a blank on the form where the campaign explains for what the money was spent. I’ve seen ‘consulting,’ ‘media’ and ‘campaign services’ plenty of times, but never ‘hush money to a ‘ho.’ If Trump reimbursed Cohen and the expenditure was listed as ‘consulting’ and not ‘consorting’ then we are in the realm of definitions.

At worst, it’s a labeling offense and no jury would convict and no prosecutor, other than one on a whale hunt, would bring charges. Fined, yes. Jail, no.

I’m in agreement with Mark Penn, formerly a consultant for the Clintons, “Paying for nondisclosure agreements for perfectly legal activities is not a crime, not a campaign contribution as commonly understood or ruled upon by the Federal Election Commission.”

Ahab Mueller had Cohen hanging from a yardarm. The bank fraud and tax charges were real and carry significant jail time. The deal was Cohen pleads guilty to actions that weren’t crimes to damage Trump in order to get leniency from Mueller on the real crimes.

As Penn points out, “[Cohen] is pleading guilty over a corporate contribution he did not make.” The one he did make was a personal expenditure that if Trump had used campaign funds to pay, he would have been guilty of committing a crime.