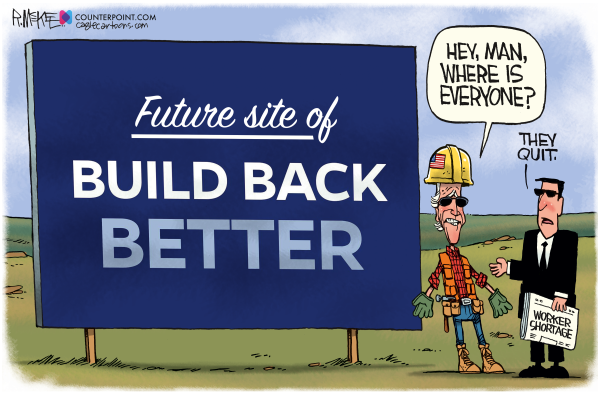 President Joe Biden’s plan to build America back better is much more costly than most everyone anticipated. The budget reconciliation bill currently stuck in the House is perhaps the most expensive single piece of legislation in history. Even a few members of his own party are uncomfortable voting for it.

According to some estimates, the new taxes, spending, and borrowing involved total out at about $10 trillion over 10 years. At one-half U.S. annual GDP pre-COVID, that’s not chump change. Biden says not to worry because it’s paid for, something only someone who’d spent 50 years in Washington could say with a straight face. He’s unfamiliar with how the private economy functions. The higher corporate taxes he touts, for example, are considered a cost of doing business that is mostly passed along to the consumer.

It’s not his fault he doesn’t get it. He’s spent almost his entire adult life in politics. Any wealth he’s amassed comes from belonging to "the aristocracy of pull," not business acumen. The people around him, however, know better.

Raising taxes on personal incomes over $400,000 a year, raising the corporate tax rate, and establishing a global corporate minimum tax won’t raise the revenue needed to cover the cost of the plan Biden is trying to sell to the American people, not to mention holdouts in his own party like West Virginia’s Joe Manchin. The big spenders know other sources of revenue will need to be tapped, if not now then later. That makes anything not taxed currently fair game, which puts changes in the private individual retirement account system on the table.

Most IRAs are treated favorably in the tax code. Either the funds are taxed when they are invested and withdrawals are made tax-free or investments are tax-free and, after the accounts have increased in value over time because of the magic of compound interest, the funds are taxed when they’re drawn down. Changing that will have downstream impacts especially harmful to investors in the middle-class.

It won’t punish the rich. It will hit the new investor class, especially the millennials entering the workforce, hard. What’s on the table limits investment options while subjecting the income they set aside for retirement to retroactive taxation. “It’s like a fisherman’s net,” IRA expert Ed Slott said. “The net picks up a lot of small fish that are unintended targets.”

This proposal to eliminate Roth 401K Conversions for IRAs and employer-sponsored plans for single filers making $400,000 or more and joint filers making $450,000 or more is bad policy and bad politics. What the Bidenites are proposing would be devastating to retirement incomes and should be anathema to senators from states with large retirement populations like Mark Kelly and Kyrsten Sinema in Arizona and Nevada’s Catherine Cortez Masto. These ideas and the proposed ban on the conversion of after-tax contributions to Roth account regardless of income would likely wreck the retirement plans of millions of average Americans.

Moreover, the ideas are absurd from a revenue perspective. According to early estimates, the changes under consideration would only raise $4 billion over the next 10 years. That’s not even a drop in the bucket of what’s needed to pay for the Biden plan. Does that mean future changes that are even more radical? Probably. Once we’re down that road it will be hard to stop even if it hurts Baby Boomers and Millennials alike.

Attempting to limit the amount people can put into Roth IRAs will reduce the national savings rate, complicate retirement planning for millions of Americans, and constitute another broken promise by the politicians in Washington. Some folks have indeed used these accounts as a tax dodge, setting up as many as they need to reduce their annual tax burden, but you don’t use a howitzer to kill a housefly.

For most Americans, IRAs are a pathway to a comfortable, secure, perhaps even prosperous retirement. The proposals currently under consideration to eliminate the Mega Roth and other independent retirement account options are an attack on the middle class that Congress should reject.

If it doesn’t, the voters will remember.